Rio Crystal is the perfect title for this bright and clear, warm and sunny set led by guitarist Paul Colombo. Its frontline pairs Colombo's nimble guitar with keyboardist Ron Thomas, supported by bassist Andy Alonso and drummer Chris Loser, in a series of jazzy instrumental workouts. It's uncomplicated swing, and the emotional directness and honesty with ...

Scottish writer David Lindsay published his A Voyage To Arcturus in 1920. It is said to have influenced everyone from C.S. Lewis in the writing of his Space Trilogy to J.R.R. Tolkien to Clive Barker. The story concerns a character Muskull and his fantastical journey across the planet Tormance that orbits the star Arcturus. And while ... 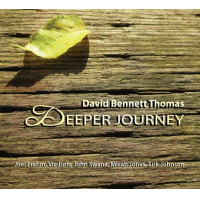 Pianist David Bennett Thomas takes inspiration from God's word. Not unlike Finish pianist/harpist Iro Haarla, on her beautiful duet set Kirkastus (TUM Records, 2015), with saxophonist Juhani Aaltonen, where Biblical Psalms informed the music, Thomas' Deeper Journey goes to the Bible for inspiration on half the tunes on this meticulously crafted, subtle--yet modern and adventurous--set of ...