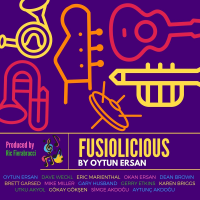 Bass prodigy Oytun Ersan is a Turkish Cypriot based in Nicosia, North Cyprus He's performed or collaborated with a host of jazz stars including Wycliffe Gordon, Mitchel Forman and drummer Dave Weckl who's featured on this high voltage fusion album.

On "L.A.," Ersan's lithe bass guitar can be heard effectively playing both a rhythm and lead part simultaneously. Weaving in and out of the ensemble passages, Ersan proves that his bass work is nothing short of spectacular. On "Rooms" the bassist introduces the number with a short solo passage rich in glissandi. There's another muscular saxophone solo from Marienthal, too, plus a deft keyboard excursion from Husband.

The multi-layered "Rise Up" features a stand-out violin performance from Karen Briggs. She also features on the short pastoral closing number "Sacred Solace," which cannily utilises two vocalists in sublime multi-layered contrapuntal interaction. Ersan reveals in his sleeve notes that this was a last-minute addition, dedicated to his late father who passed away days before the album was finalised. It's an outlier to be sure, however, it's nonetheless an exceptionally elegant track. Ersan is not merely a virtuosic bassist; he's also a highly imaginative and skilled composer as evidenced here by these seven first rate, frequently labyrinthine but always riveting, tunes.