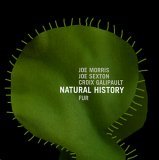 In which genius guitarist Joe Morris picks up the acoustic bass, forms a trio with two unknown musicians half his age, records just under an hour of totally improvised music... and blows us away with beauty.

Pretty much everything about Fur is a surprise. Morris himself, a guitarist born out of the splintered-note, rocket-speed intensity of Coltrane's late period, who took up the acoustic bass seriously only five years ago, stays much closer to the inside tradition here. There are no high velocity splatter gun runs—not a sustainable practicality on the instrument anyway, unless you're an Olympic athlete—but instead a measured delivery and a more leisurely exploration of sound and texture.

Then there's the band, featuring two unknowns in their early twenties, of whom at least one—tenor saxophonist Joe Sexton—is surely destined for a big future. Sexton's influences—Rollins, Ware, Shepp, and Sanders—are unmistakable, but so too are the first steps in a personal direction. Staying mainly in the middle and lower registers, and heavy on multiphonics and guttural textures, his sound is soulful and spacious and lyrical, a beguiling of the senses rather than an assault on them. Sexton is on mic almost throughout the album, except for brief bass/drum duets and solos.

Drummer Croix Galipault plays a less prominent role—he could actually do with a more forward position in the mix—except for short solos on "Flow Field" and "Personality Motor." The former is quietly remarkable: understated, not afraid to employ silence, and very melodic. Watch out for Galipault, too.

Morris' presence is strong throughout the album, but it never excludes the other two players. He sets the tempo and structure of each improvisation—each of the five tracks has its own distinctive character (check out the astonishing arco-driven adventure of "Things Of That Nature" or the almost balladic vibe of "Flow Field")—and prefers to dialog with saxophone and/or drums, rather than take centre stage.

The album is in fact as much Sexton's as it is Morris', and you feel Morris—at 55 a towering and hugely experienced master musician—is always concerned to help the young saxophonist shine. There's a heap of beauty in this trio's music right now, but also the promise of even greater things to come.

You probably wouldn't press Morris' guitar trio masterpiece Age Of Everything (Riti, 2002) on someone who thinks jazz innovation stops with Blue Note, but you could present them Fur with the reasonable expectation that they might love it.

Visit Joe Morris on the web.