By GLENN ASTARITA
December 20, 2014
Sign in to view read count 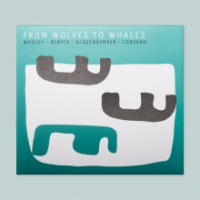 Heavy-duty improvisers, saxophonist Dave Rempis and trumpeter Nate Wooley comprise a union of Chicago and New York artists who share a similar vision. Thus, From Wolves To Whales marks the quartet's debut album. As anticipated, the musicians delve deep into the outside schema of jazz amid a largely aggressive mode of attack. With hustling cadences, energized soloing and all the customary trimmings, the band acutely morphs the improv platform with semi-structured song-forms. And while the free jazz connotations are intact, there's much more happening under the covers. Hence, the program is not rigidly centered on incessant soloing escapades and asymmetrical pulses.

Rempis kicks off "Serpents Tooth" with an intense, yet mystical ostinato motif. However, Wooley lightens the muse with his reverberating wah-wah trumpet lines via a concurrently haunting and amusing storyline, as the group builds steam, propagated by drummer Chris Corsano's swooshing patterns and Pascal Niggenkemper's linear bass notes. They march onward with Rempis' melancholic cries, where the frontline imparts sizzling flurries and spiritualized whirlwind choruses, providing another dimension to the big picture. Otherwise, "Swingin' Apoplexy" commences with a slight degree of solstice, anchored by the bassist's well-place lines, acting as a timestamp of sorts. Yet the quartet ups the ante, featuring Wooley's bluesy, soaring and twirling vernacular.

The plot thickens with a feverish pace on the final track "Count Me Out," escalated by Rempis' frantic upper-register clusters and Wooley's breathy voicings. It's a fiercely rendered tour-de-force, propagated by the band's buzz-saw modus operandi as they redirect the proceedings into red-hot subplots here and throughout.

Slake; Serpents Tooth; Stand Up For Bastard; Swingin’ Apoplexy; Count Me Out.