John Zorn: From Silence To Sorcery 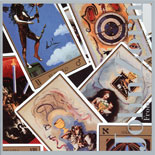 Once the enfant terrible of New Music, composer John Zorn has finally attained an irrefutable level of respectability in the world of classical composition. In addition to his recent MacArthur Foundation "genius" grant, Zorn's chamber compositions have been performed by many interpreters, including those outside of his Downtown circle. One of his quietest albums to date, the appropriately titled From Silence To Sorcery is his latest installment of nuanced chamber music compositions.

Zorn's recent interest in the occult has been apparent in his chamber music scores. Magick (Tzadik, 2004), Rituals (Tzadik, 2005) and Mysterium (Tzadik, 2005) have all been directly inspired by various occult rituals and traditions. This album is no exception.

The opening piece, "Goetia," is named after a type of black magic used to conjure evil spirits. Zorn draws upon the rich history of the violin and its association with the devil for this miniature. Violinist Jennifer Choi circumnavigates a labyrinth of dynamic shifts and challenges in this colorful and varied piece. Delivering a series of conversational phrases that hint at darker forces, she makes her instrument whisper, murmur and cry.

The second composition, "Gris-Gris" is inspired by Haitian Voodoo rituals and Korean Shamanism. Written for thirteen tuned drums and a single kick drum, it features percussionist William Winant. Beginning as a simmering exploration of tone, it rustles with understated energy slowly building to a climactic, polyrhythmic finish.

A remarkably restrained effort in contrast with his usual output, Zorn again proves his creative viability as a post-modern renaissance man with a sublime collection of chamber music.