Wobbler: From Silence to Somewhere 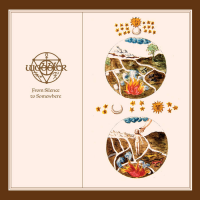 Formed in 1999, this premier Norwegian band lights up the progressive rock genre with this superfine and expertly produced studio album, where the old school prog playbook is given a bit of an uplift, especially since the band casts a gleaming persona into these multifaceted works. Sure, glimpses of Gentle Giant and classic-era Genesis weave into various movements. However, Wobbler interlaces a multitude of rhythmic and melodic aspects into these memorable compositions, combining ethereal, windblown dreamscapes with tenacious ensemble work and multi-instrumentalist Andreas Wettergreen Strømman Prestmo's lighthearted vocals.

They go for the gusto from the onset of the opening track "From Silence to Somewhere," sparked by Frøislie's fluid organ lines atop a bustling ostinato pulse, hymnal-like vocal choruses, stately motifs and guest artist Ketil Vestrum Einarsen's plush flute lines. Whereas, "Fermented Hours" is another epic-like piece designed with a pulsating groove, regal hooks, and endearing vocals that segues into a ballad with sweeping backdrops as they paint a musical canvass with polytonal shadings, executed at various cadences. And they finalize the presentation with majestic and melodious storylines amid joyful vocals and a powerful rite of passage during "Foxlight." Throughout, Wobbler tenders a refresher course on the finer elements of modern progressive rock along with a few nods to the forefathers who set the table for future expansion. * Passionately recommended.

From Silence To Somewhere; Rendered In Shades Of Green; Fermented Hours; Foxlight.