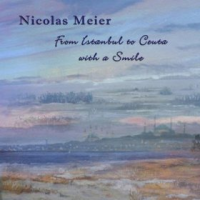 Long ago, when the world was younger and far more innocent, a British TV commercial challenged its viewers. Take a particular brand of fruit pastille (Rowntree's, to be specific), place it in the mouth, resist the temptation to chew. So deliciously fruity was the pastille that such resistance would be futile. A similar challenge might be initiated for From Istanbul To Ceuta With A Smile, from the Swiss-born, UK-based guitarist Nicolas Meier. Take the album, press Play, listen, resist the temptation to smile.

Meier is a man of eclectic taste—a heavy metal guitarist with 7even, a master of acoustic steel and nylon strung guitars and a lover of Turkish music, he's even a member of a jazz-classical-pop fusion band called Eclectica!. His love of Turkish music has led Meier to produce a series of albums—including Yuz (Naim Records, 2007) and Journey (MGP Records, 2010)—on which he's fused this music with jazz and other styles. From Istanbul To Ceuta With A Smile is filled with inspiration from Turkey, but also from Spain, Argentina, the Middle East and the United States, forged skilfully into Meier's original compositions.

The center of this music is Meier's beautiful playing: precise intonation, fluid single note lines and strong rhythmic grooves burst out of his instruments. The fast-paced "To Ceuta" features Meier at his most breathtakingly swift; on the elegiac "Memories (in the memory of Peter)" he's at his most melancholy and considered, a mood matched by Gilad Atzmon's clarinet and Patrick Bettison's harmonica; on "The Wind" his playing is at its most forceful, underpinned by powerhouse drums and percussion from Asaf Sirkis and Demi Garcia.

Meier may be at the album's heart, but he not alone. In fact, he's put together a larger-than-usual ensemble for this album, mostly musicians who have worked with him on previous projects. While Atzmon and Bettison make the biggest contributions—Bettison's bass playing is also exemplary—no player underperforms. Violinist Lizzie Ball and cellist Bernard Gregor-Smith (both members of Eclectica!) add striking harmonies to "The Gate." James Pearson—musical director at the legendary Ronnie Scott's Club in London's Soho—adds a classically-flavored piano solo to "The Lightness" and an eloquent, jazzy one to "To Ceuta."

Meier's desire to mix musics from across Europe and the Middle East shows no sign of abating. As From Istanbul To Ceuta With A Smile demonstrates, it shows no sign of becoming stale or repetitive either. Meier uses his extended group to expand his musical range with great success—and with a smile.

Opening; From Istanbul; With A Smile; To Ceuta; Memories (in the memory of Peter); The Gate; The Wind; The Lightness.