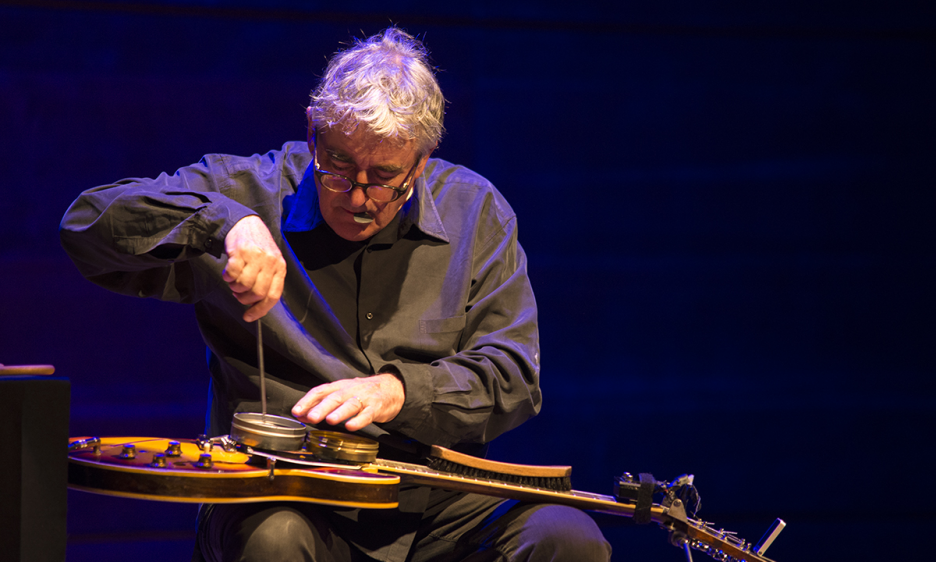 Nothing about guitarist Fred Frith's quiet demeanor as he walks on stage towards his guitar would give any indication of what will follow soon and where he will take the music and the audience with him. And during the performance at the Concert Hall of the Macedonian Philharmonic Orchestra, this master improviser and master conceptualist has shown the audience why he is at the forefront of artists that have pushed the parameters of improvised music in any setting in any given decade since the '60s. No wonder he is considered to be one of the most forward-thinking improvisers and visionaries on the planet.

The performance at the minor concert hall within the Philharmonic Complex was part of a brief solo tour throughout Europe. With its natural and sympathetic acoustics and living room intimacy, the minor concert hall provided the perfect backdrop for Frith's colorful, inventive, intriguing and sometimes intense improvisational process. The sound system was superb as it delivered a total clarity of every nuance and distortion.

For little less than an hour, Frith created sonic sculptures and paintings on his guitar using extended techniques and various objects. Frith doesn't play melodies or variations as such but he used every object at his disposal to create odd sounds that he shaped into the sonic creations that had an oddly flowing and coherent feel to them. He began the instrument flat, treating it with various preparations and building scrapyard pieces out of which he created loops and then he moulded them into sonic sculptures. Frith had a full arsenal of various objects to alter and create these unusual sounds on his electric guitar: a shoe brush, a violin bow, singing bowls, sand, an e-bow, a slide, a drumstick or various other sticks and unidentifiable objects. There were different stages of his sonic creations that followed their own internal logic where the sounds would form in various shapes only to dissolve in the next moment or evolve further. All of these techniques and approaches were aimed towards the effect of subverting the known and emphasizing the unknown.

Frith gave a rare and inspired performance, with an evident introspective delivery. It was a privilege to hear a master of the art of improvisation creating music that has the force to inspire you to rethink and reimagine a different kind of beauty. As intriguing and odd his performance was it was truly a unique experience.