By Trevor MacLaren
March 31, 2003
Sign in to view read count 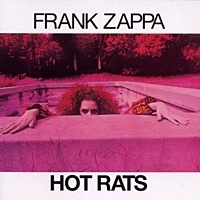 The name Frank Zappa tends to bring to mind abstract symphonic pieces or rock music filled with comical and obscene lyrics. Those more familiar with Zappa's work know he was also one of finest guitar players ever, a musical visionary who created one of jazz-rock's foundation fusion records, Hot Rats. With its heavily distorted guitars and aggressive time signatures, the record may initially turn off many jazz fans. Yet those who heard jazz guitar virtuosos such as Allan Holdsworth and Al Di Meola will have experienced styles that have been influenced directly or indirectly by Zappa's achievements on this record.

Standing in the middle of his avant-garde Mother of Invention work, Hot Rats was a shock, if nothing else, for his fans. These long focused pieces took cues from free jazz players such as Coltrane and Ayler. Zappa built this LP around his rock-based background sound and incorporated a free improv environment that was very different from the San Francisco "jam" bands of the time. Essentially he brought the dirt and aggression of rock into the complex improvised composition style of jazz, giving his own vision of fusion. Hauling in MOI multi-instrumentalist Ian Underwood, future fusion master Jean-Luc Ponty on violin, Shuggy Otis (son of Johnny Otis) on bass, and many others, Zappa also relied upon long time friend and co-conspirator Captain Beefheart to supply the vocals on "Willie the Pimp."

The opening two tracks are well imbedded in Zappa's legacy and serve as excellent examples of how the sheer genius of this record has stood the test of time. Hot Rats opens with one of Zappa's more popular tracks, "Peaches En Regalia," featuring him playing an Octave Bass while Underwood lays out the melody with multi-layered horns and piano. What is interesting about this track is the light, charming flavor of its sound. Although the time signatures change throughout the piece and the arrangement is far more complex than it first appears, its bounce has the feel of pop composers such as Henri Mancini and Burt Bacharach.

"Willie The Pimp" destroys any idea of light pop ideology, ripping open with a riff from the violin of "Sugarcane" Harris, followed by FZ hammering along with a wall of grunge and distorted guitar before Captain Beefheart launches into his vocals. What is the infamy of this track? Captain Beefheart's white-Howlin' Wolf spewing Lawrence Ferlingetti poetry for one. But the clincher is Zappa's guitar solo, which takes up the majority of the 9-minute track. For the first time ever on any Zappa/MOI record, he lets go and jams out a truly massive solo.

As Hot Rats fills out, Zappa builds up each track with melodies complemented by solos and jams in a variety of styles. Quite honestly, the record has more to offer to jazz fans than the usual FZ fans. Maybe that was Zappa's intention. Though this record has its share of straight out rock solos, a strong jazz foundation underlies each track. Zappa's fans tend to be quite musically articulate and have come to understand his idiosyncrasies, but many have a strong dislike for this record because of its jazz base. That may be, but within the fusion world we hear the aftershocks of Zappa's work over and over again.

In the work of avant-garde musicians such as Bill Frisell and John Zorn, the schematic laid out by Zappa is present. His ideas in abstract jazz composition also brought rock sounds and symphonic writing styles into direct collision with the ideologies of free jazz and fusion—and that is why this often overlooked record deserves so much acclaim. And above and beyond its conceptual innovations, Hot Rats remains a true masterpiece from one of the greatest geniuses of modern music.