By JOHN KELMAN
January 5, 2011
Sign in to view read count 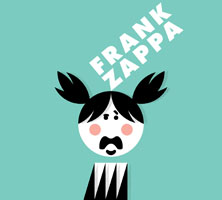 Christmas came early for Frank Zappa fans in 2010 with the release of Hammersmith Odeon on December 21, to celebrate the birthday of the late, great rock guitarist/composer/satirist who would have been 70, had he not passed away in 1993, just shy of turning 53. A three-CD set, culled from a series of early 1978 performances at the famous London venue used as the basic tracks for Sheik Yerbouti (FZ/Ryko, 1979), it's the next best thing to having been there, with nearly three-hours of classic and then-new Zappa music mirroring his set lists from the time.

Chronologically, Hammersmith Odeon follows the guitarist's Zappa in New York, recorded in 1976, where his then-regular band, including Terry Bozzio (drums/vocals) and newcomer Patrick O'Hearn (bass, vocals), were joined by an expanded band featuring a crack horn section with Lou Marini, and Randy Brecker and Michael Brecker. In London, however, it was back to basics, with a relatively diminutive group that also included percussionist Ed Mann and keyboardists Tommy Mars and Peter Wolf, who provided a broad enough sonic palette to handle orchestral compositions like this fiery version of the knotty-yet-anthemic "Peaches en Regalia," from Hot Rats (1969)—though the horn section is replaced by a rather silly vocal arrangement. Mann's vibraphone work—throughout, but especially featured in a lengthy solo on "Pound for A Brown"—continued a love affair with tuned percussion that began in the early 1970s, with Zappa's Uncle Meat (FZ/Zappa, 1969) and Ruth Underwood.

Hammersmith Odeon also features the debut of guitarist Adrian Belew, who quickly went onto even higher profile gigs with David Bowie and Talking Heads, before becoming a primary force in the revamped King Crimson of the early 1980s. His role with Zappa was largely that of a mirror, as he explained at a 2010 master class at Germany's Enjoy Jazz Festival—playing guitar while Zappa sang, and singing when Zappa played guitar. Still, there are some early traces of the outrageous sonics and effects pedal usage that have since defined Belew's career, like his volume-swelled/delayed seagulls and buzzing bees supporting a particularly greasy version of "The Torture Never Stops," while he delivers the definitive vocal parody of a harmonica-challenged Bob Dylan, as he protests the trials and tribulations of auto repair on "Flakes."

There's plenty of toilet humor for fans of Zappa's satirical side, including a version "I Have Been in You," his response to Peter Frampton's 1977 hit, "I'm in You" that now includes an outrageous, extended spoken intro to, um, position the song. Other Sheik Yerbouti tracks, like "Broken Hearts are for Asshole" are relatively close to the original, while one of Bozzio's vocal features, the epic "Punky's Whips," may actually exceed Zappa in New York for flat-out silliness.

But amongst all the gross-outs and sexual content, there's Zappa's complex writing, which marries irregular meters, time shifts and challenging harmonic structures with some spectacular soloing, the guitarist stretching out on the visceral funk of "Black Napkins," and taking a solo of "Zombie Woof" abandon on "Muffin Man."

The first full concert recording of Zappa's Sheik Yerbouti band, Hammersmith Odeon has it all—from his pointed, unexpected and ironic disco hit, "Dancin' Fool," to lengthy, jazz-centric jams like "King Kong" and the densely scored "Black Page #2," positioned here as a dance contest for members of the audience. With nine alternate versions of Sheik Yerbouti material, there's also a strong cross-section of Zappa's career to-date. These include, in addition to "Peaches En Regalia": a shorter version of "Little House I Used to Live In," from Burnt Weenie Sandwich (FZ/Ryko, 1970); "Dynah-Moe Humm" and "Camarillo Brillo," from his 1973 hit record, Over-Nite Sensation (FZ/Ryko); and the rocking "San-Berdino," from One Size Fits All. There are also early versions of tracks like the 1960s- style blues of "Dong Work for Yuda" and relaxed guitar feature, "Watermelon in Easter Hay," both from the still-to-come Joe's Garage (FZ/Ryko, 1979), and "Envelopes," from Ship Arriving Too Late to Save Drowning Witch (FZ/Rkyo, 1982).

As impressive as Zappa's material and this particular incarnation of his hardworking road group are, the splicing together of these 29 tracks from four shows to create a largely continuous performance makes Hammersmith Odeon the definitive document of Zappa's Sheik Yerbouti band. With its party pack edition including liner notes from Wolf and, more importantly, a white balloon just waiting to be blown up, Hammersmith Odeon is the perfect way to celebrate the birthday of one of the few artists to emerge from the drug- soaked 1960s who truly deserves the accolade of genius.