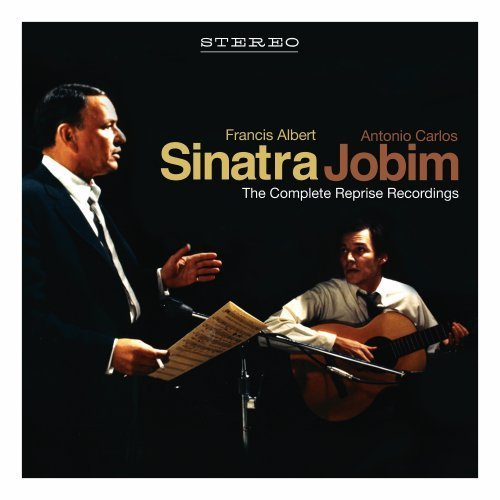 The Complete Reprise Recordings compiles every tune—all 20—that America's supreme vocalist recorded with Brazil's preeminent composer during their legendary late 1960s summits. The first ten comprise the famous, fantastic Francis Albert Sinatra / Antonio Carlos Jobim album arranged and orchestrated by Claus Ogerman, released by Reprise in 1967. Sinatra and Jobim reconvened two years later, with Eumir Deodato replacing Ogerman as arranger, to record 10 more tunes for a second Sinatra-Jobim album that the Chairman withdrew from the market as soon as it was shipped (we'll explain why). Seven of those tunes later appeared as the first side of Sinatra & Company, released by Reprise in 1971; this new compilation unveils the other three—"Bonita," "Desafinado (Off Key)" and "The Song of the Sabia"—for the first time.

Few moments in music are more beautiful and magical than the softly strummed guitar, sighing horns and whispered drums that introduce you to "The Girl From Ipanema," and "Change Partners" stands among Sinatra's best Irving Berlin interpretations. But unless you've experienced the magic and wonder of that first Sinatra/Jobim release, it is almost impossible to explain in words how beautifully its music floats and sways. Since many such words have already been written, we can concentrate on the newly released music instead.

Deodato contributes several fantastic arrangements. He mixes the principals' wordless vocals into the rhythm track of "Drinking Water (Agua de Beber)," bouncing them across the stereo channels, and also serves up the funkiest half-gospel, half-Brazilian piano with which Sinatra ever recorded. Deodato casts Sinatra's voice upon a simply perfect "Wave," with calling acoustic guitars and strings, answering flutes, and Sinatra snuggling down deep in his register with supreme control (and even some extracurricular funky bass/drum "four" play in the fade). Jobim, Deodato and Sinatra vocally and instrumentally illuminate "Someone to Light Up My Life" into a polished, golden glow. That one really should have been a hit.

Hindsight confirms Sinatra's instinct to withdraw that second album with Jobim because of its take on "Desifinado (Off Key)," in which Jobim's wavering vocal finds but too rarely holds its mark. Even so, this set's conclusion, "Bonita," captures a truly magical moment when the instruments and beat completely drop out and the only thing left to carry its melody is Sinatra's strong and sure voice, followed and traced by strings in a mysterious romantic shadow. Magic that was worth waiting for. Magic that now is here. Finally.

The Girl from Ipanema; Dindi; Change Partners; Quiet Nights of Quiet Stars (Corcovado); Meditation; If You Never Come to Me; How Insensitive; I Concentrate on You; Baubles, Bangles and Beads; Once I Loved; The Song of the Sabia; Drinking Water (Agua de Beber); Someone to Light Up My Life; Triste; The Happy Madness; One Note Samba; Don't Ever Go Away; Wave; Off Key (Desafinado); Bonita.