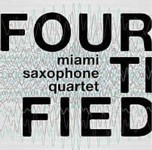 Before even blowing a note, the Miami Saxophone Quartet has earned bonus points by doing something other such groups would be wise to emulate: it has added a rhythm section (at least on three of Fourtified's nine tracks). There's even a second quartet—viola, cello, two violins—on the aptly named three-movement "Jazz Suite for Double Quartet," Latin percussion (courtesy of Richard Bravo) on "Spunky" and "Seventh Sign," and a guitarist (Daniel Warren) on "Spunky." To add more spice to the bill of fare, alto Gary Lindsay doubles on synthesizer on his arrangement of Byron Miller's "Sign." Despite being partial to woodwinds, it's pleasing to hear the saxophones in the company of assorted other instruments.

Even so, it is the saxophones (Lindsay; Gary Keller, soprano; Ed Calle, tenor; Mike Brignola, baritone) who are the drawing card here, and they never fail to please, individually or collectively. The interplay is often breathtaking (dig the awesome precision, for example, on Dave Brubeck's "Blue Rondo a la Turk"), the solos enterprising and perceptive. "Blue Rondo" (enhanced by Chuck Bergeron's resonant bass) is followed by another endearing Brubeck melody, "It's a Raggy Waltz," on which everyone (including pianist Jim Gasior) has a chance to spread his wings. Calle wrote the diaphanous "Dancing on a Cloud" and down-home closer, "Spunky." Gasior, Bravo, Warner, Bergeron and drummer Lee Levin comprise the rhythm section on "Spunky." The quartet (sans backup) rounds out the program with Paquito D'Rivera's serpentine dance, "Wapango."

Lindsay's twenty-seven minute-plus "Jazz Suite" blends the two groups in a splendid association, rife with exhilarating musical moments. Keller and violinist Glen Basham solo on the first movement; Keller, Lindsay and Brignola on the second; Calle on the third. The suite forms an opulent centerpiece for an album that is as persuasive as it is stylish and engaging.