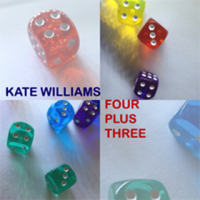 Pianist Kate Williams seems to be fond of septets: Four Plus Three is her third septet album after Made Up (kwjazz, 2011) and Atlas & Vulcana (kwjazz, 2014). Of course, there are other albums in her discography, including the excellent Smoke & Mirrors duo recording with saxophonist Bobby Wellins (kwjazz, 2012), but the seven-piece ensemble seems to suit the breadth of her ambition. This particular combo—piano, drums and strings, brings a new set of musical possibilities to Williams' originals and arrangements of classic tunes.

In the jazz world Three Plus Four might be considered a more appropriate title—Williams, bassist Oli Hayhurst and drummer David Ingamells form the piano trio, the members of the Guastalla Quartet form the string section. But such divisions are irrelevant: this is the work of seven talented musicians given equal prominence by the selfless leader. The collaboration began in 2014 when Williams arranged Bill Evans tunes for jazz trio and full orchestra: this is its first appearance on a recording.

There's a wide range of moods and emotions on display here. "Love For Sale" encompasses most of them. This is a stunning interpretation of Cole Porter's classic—even without the lyric there's drama, sadness, energy and adventure, each of the seven players giving their all and at their most expressive. It's followed by another fine interpretation, of Antonio Carlos Jobim's "Portrait In Black And White" (a.k.a. "Zingaro"). This time Sergio Serra's cello and Hayhurst's double bass are central to a beautiful performance. Bill Evans' "Walkin' Up" opens with an irresistibly jaunty pizzicato theme from the strings.

Williams' own compositions also range across moods and emotions. Her prowling, confident, "Big Shoes"—strident walking bass, punchy piano, the waspish string quartet—is great fun. "Eleven Tonal" combines some dramatic string playing with calmer passages of gentle swing. "Storm Before Calm" increases the drama, strings and piano creating aural images of tempestuous weather which give way to the calmness of Williams' solo. The ballad "Orchid Avenues" is a solo feature for its composer, with Williams' delicate and spacious playing at its most graceful and melodic—one plus none, so to speak.