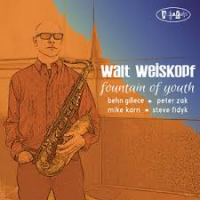 Fountain Of Youth is the latest installment of Walt Weiskopf's mid-career renaissance. In reviews of Weiskopf's three previous Posi-Tone releases, I made the misstep of treating his imposing skills as a tenor saxophonist, composer, arranger, and bandleader as separate, albeit compatible entities; this time around I realized that they are indeed parts of a larger, all-encompassing vision that winds through the disc's eleven tracks.

Whereas Overdrive, Open Road, and The Way You Say It are—with few exceptions—driven by Weiskopf's compositions, there's a sufficient amount of non-original material in Fountain to make a case for his transformative powers in regard to the Great American Songbook, and the capacity to shape them and his own works into a cohesive program.

"Close Enough For Love," "How Are Things in Glocca Morra?," "Laura," "Young And Foolish" (as well as vibraphonist Behn Gillece's "Double Date") are handled with care while recast as Weiskopf vehicles; in the end, it's a tribute to his interpretative acumen to say that they don't stand in stark contrast to his six originals. A varied and sturdy lot, Weiskopf's compositions aren't knockoffs of classic jazz tunes. A couple of favorites are the brusque, no nonsense "Hot Dog Days," and the carnival-like, mercurial "Heads In The Clouds." Moreover, the relative brevity of the tracks—only one is over seven minutes and most are considerably shorter—further encourage the perception of the record as a unified endeavor.

Weiskopf's tenor is perhaps foremost of Fountain's overlapping virtues. One of the impressive things about his instrumental prowess is the capacity to sound emotionally convincing in vastly different contexts. A fierce, gripping, blues drenched disposition—which contains an element of calculation in keeping with the precision in which he articulates each note—characterizes "Backstage Blues," "Loose Lips," and "Hot Dog Days." In short, he often sounds positively invincible. Conversely, Weiskopf's ballad playing isn't merely pretty; in particular, the heads of "How Are Things In Glocca Morra," "Young and Foolish" and his "Echoes Of The Quiet Past" express a palpable sense of vulnerability. The monster tenor sax is briefly transformed into something smaller, almost frail, and recognizably human.

It's apparent throughout that Weiskopf is writing and arranging for people who challenge, stimulate, and inspire him. Shout choruses and written figures behind the soloists invariably prove out in relation to each composition. Weiskopf utilizes these devices just enough to keep things sounding fresh and avoids the all-too-common, seemingly endless cycle of head/solos/head. Gillece, pianist Peter Zak, bassist Mike Karn, and drummer Steve Fidyk, all of whom have performed on at least one of his previous Posi-Tone releases, relish the challenges of Weiskopf's arrangements and acquit themselves admirably when its their turn to solo. In particular, when Zak follows Weiskopf, it feels like a sudden change in the weather, without any break in momentum. Karn merits special mention for playing some of the fiercest, most propulsive bass lines in recent memory.

Backstage Blues; Close Enough For Love; Petal; How Are Things In Glocca Morra?; Loose Lips; Echoes Of The Quiet Past; Laura; Young And Foolish; Hot Dog Days; Heads In The Clouds; Double Date.