BY ANTHONY SHAW
November 14, 2017
Sign in to view read count 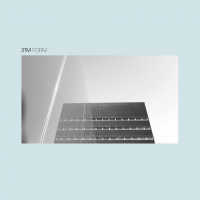 Teppo Mäkynen has been playing the Scandinavian jazz circuit for well over 20 years, typically as the drummer in the company of the Five Corners Quintet (which itself grew out of Nuspirit Helsinki), where he also partnered the featured bassist here, Antti Lotjonen. In this line up he was playing a type of post-bop acoustic jazz, but with an emphasis on danceability. This latest album is something of a return to an earlier interest in electronica (hear 2003 released Smelly on Exogenic Breaks Records, with guitarist Jarmo Saari), but retaining still his commitment to an acoustic base.

The trio is completed by the tenor saxophone of Jussi Kannaste, another graduate of Sibelius Akademy Music Department (as is Lötjönen) who has also mixed with many leading names in the contemporary Finnish and Scandinavian jazz scene, such as drummer Jaska Lukkarinen and Swedish guitarist Hans Olding. His contributions here are relatively restrained, complementary to the overall meditative vibe.

That said, this album is anything but meditation music. Mäkynen has composed for most of his career and is responsible here for all compositions, as well as production and pictures in the exclusively photographic liner notes. All compositions retain a solid core around which the trio explored their leads. Tracks like D feature the interweaving of a strong melodic line with the addition of Mäkynen's 'sounds,' in this case mainly a sampled vibraphone countermelody. Other sonic surprises include the looped Arabic rhyme of Iran, and the minimalistic Krautrock washes of the final track, Dawn

The album is an intriguing mix of these two worlds, welded together by the prominent sound of Mäkynen's cymbals and skins, Lötjönen's robust bass and Kannaste's tasteful saxophone. The impression is enigmatic, reinforced by the spartan 'liner notes' and obscure titles. In this way the album reveals a quixotic side of this ever subtle drummer's musicality not usually indulged so openly.