BY DAN MCCLENAGHAN
September 15, 2012
Sign in to view read count 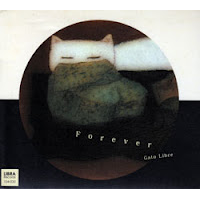 The team of pianist Satoko Fujii and trumpeter Natsuki Tamura produces a lot of music. More often than not, it's Fujii in the leader's chair, in one of her numerous big bands, quartets, trios or in duo outings with Tamura. By normal standards—that is, not in comparison with Fujii—Tamura's output as a leader could be considered rather busy. Though he claims to be lazy in the liner notes of his group Gato Libre's Shiro (Libra Records, 2009), since 2005 he has produced five excellent CDs. Not bad for a lazy guy.

Forever the fifth outing by Gato Libre, follows the same path as the group's previous four sets, with the tranquil, European-flavored quartet still with its original line-up of trumpeter Tamura, who is again joined by Fujii—on accordion—along with acoustic guitarist Kazuhiko Tsumara and bassist Norikatsu Koreyasu.

Over the course of seven years and five discs, Gato Libre has evolved in small increments with a subtle grace. The sound is light and delicate, the atmosphere calm and meditative. Forever finds the group's interplay more focused and refined, more song-like and lyrical. Tamura has to be regarded in the top level of jazz trumpeters, with his dark and dusky tone and unhurried delivery of beautiful melodies, as Fujii often lays down a drone backdrop, sometimes not sounding quite like an accordion, as she makes music that seems to mirror what many groups try to do via electronics and synthesizers, while Kazuhiko and Koreyasu generate gentle and diaphanous rhythms.

Tamura is one of the most adventurous artists out there. One only need to hear his solar flare of a disc Hada Hada (Libra Records, 2003) or his collaborative group First Meeting's Cut the Rope (Libra Records, 2010) to get shaken away from all normal expectations for what music should be. But his Gato Libre discs tread the most consistently traditional path, and serve up some of the most lilting and beautiful sounds in the Tamura/Fujii oeuvre.

Sadly, Forever will be the last of the Gato Libre recordings with the original line-up owing to the passing of bassist Norikatsu Koreyasu in September 2011. Though the group will live on, Tamura doesn't want to bring in another bassist. He has been using guest artists in his shows—trombone, tuba, percussion—and says a final choice will be made on a new regular member soon, and Natsuki Tamura and his group will be off in a new direction.