By James Nadal
September 15, 2012
Sign in to view read count 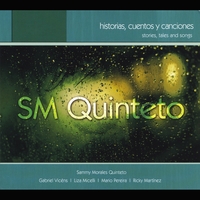 There is a positive musical movement coming out of Puerto Rico, with musicians putting a homegrown spin on their formal training, combined with progressive and modern jazz. At the forefront is perennial bassist Sammy Morales who, with his SM Quinteto, has composed and produced a sophisticated compilation of original material on "Stories, Tales, and Songs" , graciously defying categorization yet maintaining sincere creativity.

Morales and his group performed these songs in live settings for some time prior to the recording and, though the music appears complicated, the quintet's familiarity with the material is quite evident. From the opening waltz-tinged "Vals para Gaby" through "Canto al Sur," the accordion mastery of Ricky Martinez plays a prominent role in the establishment of novel nuances. He sets up the melancholy tone of "Pequeño Pintor" as a brooding tango, adhered to by pianist Liza Micelli, who also contributes an exceptional baroque organ solo on "Soledad Imperfecta." "Rumbita," with its subtle flamenco influence, is a wonderful vehicle for improvisation as the group exhibits the dramatic panache required in Spanish music. "Las Preguntas," and "El Reposo" are adventurous forays into contemporary jazz, with guitarist Gabriel Vicéns and Morales spinning and weaving deftly through passages with the versatile drummer, Mario Pereira, reinforcing that this is a working ensemble which has honed its proficiency by constant gigging.

As an accomplished and acknowledged bassist, educator and composer, with decades of experience, Morales draws deep from his Spanish cultural roots and a profound knowledge of its music, spanning from Iberia to Patagonia, the Caribbean and beyond. With "Stories, Tales and Songs" he set out to break the mindset that suggests improvised, Latin-infused jazz must have a dominant percussive element to achieve its goal of being accepted by a comprehensive audience, and presents an exemplary example to prove his point.