By Hrayr Attarian
September 3, 2014
Sign in to view read count 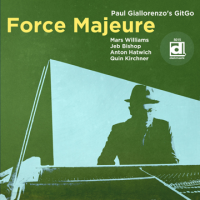 Pianist Paul Giallorenzo's Force Majeure, his second album with his ensemble GitGo, covers a wide variety of motifs but maintains a consistently stimulating, darkly hued ambience. This and Giallorenzo's unique style and modal harmonies give the disc its cohesive character.

The music ranges from the free flowing, five-way conversation on "A Tone" to the undulating, reggae influenced "Roscoe Far I." On the former the members of the quintet create their simultaneous monologues out of sparse notes, honks, thrums and thuds mixed in with carefully weighed silent pauses. Bassist Anton Hatwich's brief con-arco drone enhances the provocative and thrilling nature of the piece. On the latter, trombonist Jeb Bishop's hypnotic and complex solo emerges out of the melody's laid-back groove. It satisfyingly contrasts with the saxophonist Mars Williams' gritty, urgent tone as the latter takes his turn in the spotlight. Giallorenzo leads the band in subtly evolving refrains that embellish the main theme.

Giallorenzo's resonant chords form the backbone of the haunting "Blowings On." Bishop's mystical trombone soliloquy expands over the tense and pensive rhythmic vamps with lyrical elegance. Williams' passionate wail follows with vigorous spontaneity and innovative ardor. These three distinct moods coalesce to close the tune with a quietly electrifying touch.

This type of dramatic element permeates the other compositions as well. On the inside/outside "Fits and Starts" loosely swinging refrains punctuate the delightfully dissonant group extemporizations. It closes with Bishop and Hatwich's intriguing duet that follows the leader's energetic and dense flirtation with atonality.

"Rock Terrain" also features the amalgamation of the traditional and the Avant-Garde. It opens with drummer Quin Kirchner's supremely agile, thunderous beats and closes with Giallorenzo's engaging circular lines with the just the right hint of angularity.

Giallorenzo and his GitGo have created an alluring and sophisticated work that remains surprisingly accessible without abandoning a robust, explorative spirit.