Jacques Lesure: For the Love of You 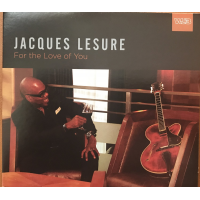 For one to whom almost every well-strummed guitar sounds basically the same, an honest appraisal of any guitar-led group must begin with other earmarks such as group interplay, individual dexterity, choice of material and over-all level of musicianship. Happily, guitarist Jacques Lesure's latest recording, For the Love of You, scores high in every respect, making the album a pleasure to hear and enjoy.

Lesure, a Detroit native whose jazz roots can be traced to such masters as Kenny Burrell, George Benson and Grant Green, among others, displays a sure touch, pleasing sound and clear-eyed approach when soloing. His bandmates are at his side every step of the way, with pianist Eric Reed especially responsive whether comping or soloing. Bassist Tony Dumas is rock-solid in support (and an accomplished soloist as well), as is drummer Willie Jones III (for whose record label, WJ3, the album was recorded).

Lesure wrote only one of the album's seven numbers, the easygoing blues "That's Mr. Burrell, Thank You," which follows the last of two standards, Lee Adams / Charles Strouse's cheerful "Put on a Happy Face" from the Broadway musical Bye Bye Birdie. The other evergreen, Mitchell Parish / Peter DeRose's "The Lamp Is Low" (based on Maurice Ravel's "Pavanne") opens the session on a breezy note, leading to the soulful title song, written by the Isley brothers. Cedar Walton's "Holy Land" is an irrepressible charmer, T-Boy Ross / Leon Ware's "I Want You" an earnest paean to love's yearning. Lesure lowers the curtain with the lustrous ballad "The Way of the World."

As noted, the quartet is staunch and steady, the music lucid and engaging. Any appraisal would be remiss, however, should it fail to mention the album's concise thirty-eight-minute playing time. Aside from that, there's not much to censure.

The Lamp Is Low; For the Love of You; Holy Land; I Want You; Put on a Happy Face; That’s Mr. Burrell, Thank You; That’s the Way of the World.