Stockton Helbing: For Nothing Is Secret 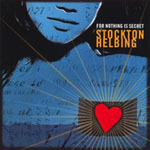 Stockton Helbing's stock is rising. In his second solo effort, For Nothing Is Secret, the Texas-based drummer has not only a recording with pizzazz, but the making of an exciting and crowd-pleasing festival touring unit. As the album's title suggests, his music should not remain secret for long. Trumpeter Maynard Ferguson recognized Helbing's talent early on and called upon him to anchor his ensemble as well as produce his last studio date, just before suddenly passing in August 2006. This album is a dedication to Ferguson, who was his hero and friend.

With plenty of kick, the group builds well on the spirit of Ferguson's music. The strength of this group lies in the close rapport each has to this particularly appealing style. For example, the leader's solid delivery of the oddly accented 16th-note feel of "Shifty drives this thrusting funk right home. And one cannot fail to mention Johnston's solid body guitar workout on "Sco-ing. Borrowing on master guitarist Allan Holdsworth, he spatters fluttering ultra-legato phrases, occasionally throwing in disjunct lines reminiscent of John Scofield's early playing, hence the title.

A Certain Amount of Indiscretions; System Theory: Reloaded; If You Could See; For Nothing Is Secret; The Bad in Good; Pwned!; Shifty; Say a Silent Prayer; Sco-ing; Emihl