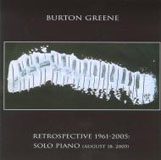 Clarity of an all-encompassing vision can push a musician to say in music whatever is desired no matter what the response. This approach bolsters certainty and confidence which resultantly flows out of the instrument the musician plays. Both certainty and confidence exude from Burton Greene on Retrospective 1961-2005, Solo Piano. The recording is the third and only solo of a series by Greene on the CIMP label.

Chicagoan Greene was a founding member of the Jazz Composers Guild in the 1960s, which tried to lend credibility to the flock of vanguard musicians working at the time. He was primed in honest expressiveness. Retrospective includes compositions from those days, which Greene has reworked ("Blue Orpheus, "Boog-a-do and "Mark IV ). Additional compositions from the 1980s through to the present day fill out the roster.

Personalized versions of works from familiar composer/musicians (Wayne Shorter's "Backstage Sally, Thelonious Monk's "Rootie-Tootie, Dave Brubeck's "In Your Own Sweet Way, Wilbur Morris's " Chazz ) juxtaposed with original pieces that imply childlike innocence and, at other times, desire or agitation and brashness give the recording a rich texture. The music is in constant motion. The changes happen naturally as a matter of course. The only surprise is the insertion of Greene's voice in "Home On De-Range when he spontaneously quotes political commentary.

Basically, the entire recording resembles the way the most dynamic abstract visual art can dazzle the seasoned viewer; Jackson Pollock comes to mind. The swirling musical lines and blatant sound colors are woven together easily and rest comfortably together. Greene evokes ever-changing moods and can sometimes trigger breathlessness in the listener.

Greene delivers startling keyboard extremes in mysterious ways. And it is the mystery which creates a spell-binding effect. He will mold an idea to the end of realizable possibility with the pianistic vocabulary he owns. A recognizable style might creep in and make perfect sense within the evolutionary stream. Greene's music comes from the well of experience that hosts a balance of the internal and external. Nothing can alter the music's direction.