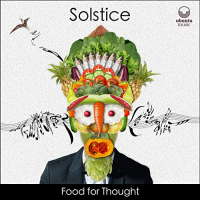 An off-the-wall and extraordinarily beautiful album, Food For Thought is London sextet Solstice's follow-up to Alimentation (Two Rivers), a niche-jazz landmark in 2016. The album blends jazz with prog-rock and tropicalia-like psychedelia. It is intricate, lyrical and wildly inventive. It is also technically demanding and forensically arranged, yet it all sounds effortless. It is, most of the time, impossible to tell what is improvised and what is pre-composed. It is a jazz album unlike any other we have heard since, well, 2016.

Saxophonist and flautist Tori Freestone, vocalist Brigitte Beraha, keyboardist John Turville, guitarist Jez Franks, double bassist Dave Manington and drummer George Hart are all bandleaders and in-demand sidepersons. Their paths have criss-crossed in dozens of lineups, and though Solstice has recorded infrequently, it sounds like a band not a project.

Without downplaying the contribution of every member of Solstice, the defining sound of the album is Beraha's voice, partly because it is often the one inhabiting the highest register, partly because of its incandescent presence. Beraha's singing is mostly wordless; she does not scat but she improvises and embellishes, and she has virtuoso technique and perfect pitch. She emerged in the mid 2000s when she was associated with the F-IRE Collective, who were then London's most exciting community of musicians and the nursery for several future stars. A core F-IRE member was the saxophonist Ingrid Laubrock, who played on Beraha's debut album, the standards based Prelude To A Kiss (Future Music, 2005). So, too, did Solstice's drummer, George Hart. Solstice's keyboard player, John Turville, teamed up with Beraha for the co-led Red Skies (e17 Jazz, 2013).

There are eight tracks on Food For Thought, all of them originals. Two of the tunes were written by Beraha, two by Tori Freestone, two by Dave Manington, one by Jez Franks and one by John Turville. The arrangements are, presumably, collective efforts, for there is seamless cohesion throughout the album's sixty-three minutes. The whole thing comes over more like a suite than a collection of pieces by five composers.

Food For Thought gets physical release in September 2021—when, hopefully, Solstice will be able to tour it. Meanwhile, it comes out digitally in late February 2021.