Nina Simone: Fodder On My Wings 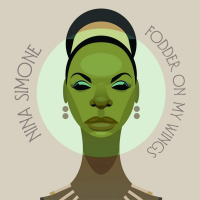 Nina Simone found success from the beginning of her recording career in 1959. With the release of Nina Simone at Town Hall (Colpix), her third album that year, she became a fixture on the downtown New York club scene. Her life and career took a different turn not long afterward. Simone's activism in the Civil Rights Movement deepened in the 1960s as a reaction to the assassination of Medgar Evers and the fatal bombing of the 16th Street Baptist Church in Birmingham, Alabama. Moving to the Dutch label Philips, with the release of Nina Simone in Concert (1964), she used her notoriety as a platform for addressing racial inequality in the U.S. Her song of protest, "Mississippi Goddam," from that album, damaged her career in America, her music boycotted in several Southern States. Simone supported the violent revolutionary philosophy of her New York neighbor, Malcolm X, and advocated a separate African American state. By the late 1960s both Malcolm X and Martin Luther King, Jr. had also been assassinated and the disillusioned artist left the U.S. in 1970, never living in her native country again. Simone was untethered, living in Barbados, then Liberia, Switzerland, the Netherlands and finally France, where she remained until her death. Her assets dwindled in Europe but she preferred playing small clubs, for little compensation, to returning to the U.S.

Fodder On My Wings was originally released on the French label Carrere in 1982 and had been re-released on three labels before this Verve edition. From her days at Colpix, Simone's contracts gave her significant creative control, including her choice of album material. It has been a drawback on many Simone albums, as her wildly varying tastes made for a chaotic sequence of songs. Fodder On My Wings is no exception. However, the strength of many of the thirteen songs tips the scale in Simone's favor. The calypso style of "I Sing Just To Know That I'm Alive" and "Liberian Calypso" reflects the influences of her shifting home bases, augmented by her raw, commanding vocals. The spirituals "Il y a un Baume a Gilead" and "Thandewye" are especially appealing in different ways; the French version of "There is a Balm in Gilead" is compassionate, while the latter song emits visceral power. "Vous Etes Seuls, Mais Je Desire Etre Avec Vous" (You are alone, but I want to be with you), despite being an almost constant repetition of the title, is one of the most appealing songs on the album.

A few tracks just don't work because they are a bad fit in the collection or feature puerile lyrics. "Stop" is Simone's critical statement on the show tune "Send in the Clowns." She tells us that the song has no purpose, thereby creating a circular argument with her evaluation. "Alone Again Naturally" re-tools the original lyrics to fit the death of Simone's father, and she adds in some Japanese piano passages; the whole thing is a little too messy to evoke genuine emotion. Novelty tunes and a lack of consistency diminish the overall listening experience to some extent but, had the strongest material on this album stood alone, Fodder On My Wings might have been essential. Simone was a great vocalist, a talented musician and composer with powerful things to say, and they should be heard.

I Sing Just To Know That I'm Alive; Fodder in Her Wings; Vous Etes Seuls, Mais Je Desire Etre Avec Vous; Il y a un Baume a Gilead; Liberian Calypso; Alone Again Naturally; I Was Just a Stupid Dog to Them; Color Is a Beautiful Thing; Le Peuple en Suisse; Heaven Belongs to You; Thandewye; Stop; They Took My Hand.