By CLIFFORD ALLEN
December 25, 2009
Sign in to view read count
Much like in the United States, the jazz revolution in Europe was at the hands of not only a group of very forward thinking musicians, but also some incredibly vanguard record labels. One crucial difference, however, is that in Europe, some of the most important labels were collectives partly instituted by the musicians themselves, as well as their close sympathizers. In England were Incus and Ogun, in Holland was the Instant Composers' Pool (ICP), and in Germany the new music was best represented by FMP/Free Music Production. FMP began under the auspices of managing free improvisers and directing concerts, festivals, and workshops, though recordings soon followed. With over 200 LPs and around 140 CDs in its forty-year history, FMP has long been one of the bulwarks of uncompromising improvisation and has set the stage for similar exploits among small labels worldwide. 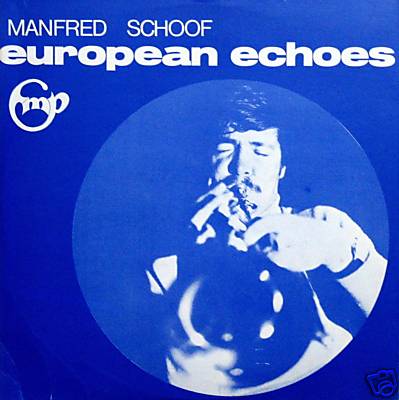 Jost Gebers, a sometime bassist, and Wuppertal-raised reedman Peter Brotzmann started FMP in 1969. Brotzmann had already produced two albums on his own BRO label, The Peter Brotzmann Trio and Machine Gun (later reissued by FMP), to almost negligible distribution. Gebers puts it this way: "in summer of 1968, Peter asked me whether I could help him get something together because his appearance at the Berliner Jazztage had been cancelled over the band's attire [they refused to wear three-piece suits]. Half a year later, I had the possibility to make some things in the Akademie der Kunste. They asked if I could organize something in their exhibition "Minimal Art." Then, in summer of 1969, Brotzmann and I talked about a company for management and things like that. In September I started the company Free Music Production, and at the end of the year we released [trumpeter] Manfred Schoof's European Echoes." Featuring many of Europe's top free players like Pierre Favre, Han Bennink, Gerd Dudek, Enrico Rava, Derek Bailey and Brotzmann, it consists of one thirty-minute piece, a full-blast (with solos) over two sides. Gebers says it was a simple choice to release this session first: "a lot of people in the band were musicians around us, our friends, and since it was a radio tape we didn't have to pay to record it. So that was a beginning."

Soon, FMP became an expanded collective and released music by Brotzmann, pianist Alexander von Schlippenbach, bassist Peter Kowald and drummer Detlef Schonenberg. There was also an early opportunity to produce a pair of records by East Berliners Ernst-Ludwig Petrowsky (alto saxophone) and Ulrich Gumpert (piano). But Gebers, who had quit playing music to focus on running the company in addition to his day job as a social worker, found it to be imperfect: "In the beginning of 1976 the collective finished, and it was nearly the end of the label because everybody had other ideas. That was normal—they wanted to play music and put it out, so our early projects were always the same people. For me, because I wasn't playing, it didn't seem like an accurate representation of who was making all this music. I wanted to release recordings of different and younger people too." Gebers also started the sub-label SAJ with Swedish drummer Sven-Ake Johansson, which released a number of classic experimental and avant-garde records by people like Hugh Davies, Yoshi Wada and Heiner Goebbels-Alfred Harth, as well as other projects that didn't fit the FMP approach. 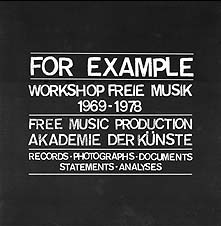 The crucial thing about the label has been its documentary style, which though not totally unique, is especially important because many of the releases have grown out of live productions, including Workshop Freie Musik (1969-1998) and the Total Music Meeting (1968-1999). "The Workshop was around Easter time at the Akademie and it had a fixed small budget. The other was in the autumn at the time of the Berliner Jazztage. The Workshop was always a laboratory, because of the better financial situation, so we had the possibility of doing special things. In 1983, for example, we did five days of just musicians' names, no fixed program, and it was sold out. This was always a beginning for things that later happened at the Total Music Meeting and over the years, and because of the name recognition the possibilities became more interesting... the quality of this project was very important in the musicians' circles, and it was easy to ask them whether they were interested in coming for a small fee."

The history of the last ten years of FMP is something more complicated, though it has produced major works by trumpeter-composer Bill Dixon, saxophonists Charles Gayle, John Butcher and many others. "I was looking around to see what could happen with the label. The concept was that FMP-Publishing would serve the label as its new owner from January 1, 2000. From midsummer 1998, I was talking about distribution and manufacturing with Helma Schleif. Over one and a half years we came to an agreement that, from the beginning of 2000, she would begin the manufacturing and marketing of the label's CDs. The deal was not the best, because she had some other ideas. She told everybody that she owned the label and things like that; for me, it was especially hard to see her website (which posed as "FMP") in the beginning of 2003, when I moved from Berlin to Borken and found out about the possibilities of the internet." At this point, it was the end of the partnership. Owing to the ongoing violation of the contract, the licensing agreement was cancelled without prior notice by FMP-Publishing in February 2003, which resulted in a tough legal battle; in November 2006, it was determined that termination of the license agreement was justified. 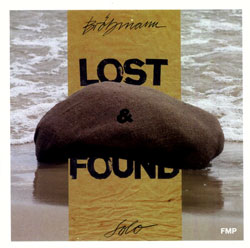 Gebers has continued as the producer and is now (since January 2007) in charge of the label and activities like archiving, publishing, and maintaining an online presence. Currently, the in-print FMP CDs (including work by Brotzmann, Cecil Taylor and Olaf Rupp) are distributed by Records, a distribution company run by Ulli Blobel. His label Jazzwerkstatt has also reissued some out-of-print titles. Other reissues can be found on labels like Intakt, Atavistic or RecRec. Freed from the complications of the split, Gebers can now return to running the label, though he takes its future at a more delicate pace: "I'm not the youngest man and so we will see what happens. It was never about the master plan, but about the ideas of impulsive musicians. From that, I want to release what I like—artists that are for my pleasure."