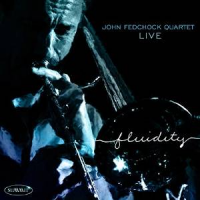 Fluidity could have just as easily been called A Night In The Life Of A Jazz Musician. There's no high profile or out-of-place guest here to sell records, no world famous stage for this quartet to grace, and no abstruse concept to push the music with. This is just four men doing what they do on any given night in a small club in Anywhere, USA. Were it any four men, of course, nobody would probably pay Fluidity much notice. But with trombone giant John Fedchock in the driver's seat, this one is likely to get its due.

Fedchock recorded this album over the course of several nights spent at a club called Havana Nights in Virgina Beach, Virginia in August of 2013. The band included two of Fedchock's go-to musicians in the Mid-Atlantic region—pianist John Toomey and bassist Jimmy Masters—along with his longtime drum companion, Dave Ratajczak, who was flown in from New York for the occasion. All four players gelled beautifully, recorded some fine performances, and went on with their lives. Six weeks later, this club would shutter its doors and fade into the mist of history; a year after that, Ratajczak would be gone, taken away too soon by cancer. Both serve as reminders of the sad state of impermanence that surrounds us all, but the music that was made by these musicians on those summer nights speaks to something else entirely: the joy in the art of creation.

The material presented on Fluidity is largely familiar, but Fedchock and company don't simply dole out workmanlike jazz performances. Right from the opening track—a take on "East Of The Sun" that plays with the placement of the changes, stretching out and changing the phrasing a bit in the process—Fedchock and his sensitive-cum-swinging band mates make it clear that they're not phoning this in. From there, they move into bossa territory on "Havana," toss off a pleasing and uncomplicated "I Hear A Rhapsody," and deliver the most soothing "Make Someone Happy" to arrive in some time. Toomey's piano introduction sets the stage on that last number, but it's Fedchock's beautifully relaxed delivery that sells the song, making it the standout track on the album.

As the album continues, Fedchock and company provide low flame intensity on "Under The Radar," deliver lighthearted swing on "Weaver Of Dreams," and work a mellow and in-the-pocket angle on "I've Never Been In Love Before." By the time the band arrives at the energetically swinging closer—Joe Henderson's "Homestretch"—there's little left for these men to prove or say. The evenings that Fedchock, Toomey, Masters, and Ratajczak spent at Havana Nights may be a mere blip in their respective careers, but they speak volumes about what these men are capable of and what musical riches can be discovered in clubs throughout the world on any given night.