BY GENO THACKARA
December 26, 2018
Sign in to view read count 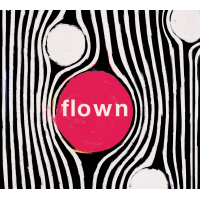 As band names go, this is one with a range of possible meanings. Some searching shows that it's actually been used by a handful of different outfits ranging from punk-metal to experimental electronics. The Flown from Modena, Italy, meanwhile, finds a niche blending an insistent sense of rhythm with the looseness of free-jazz improv. They sound like they've flown away from not just the earth, but the more obvious notions of structure and harmony as well.

If they don't decide exactly how their own structures and harmonies should come out on this debut outing, that's not really the point—these three seem to consider exploring an end in itself. Aficionados of analog keyboards doubtlessly understand the joy of tweaking tones and twiddling knobs just for the fun of it. There are vaguely spacey '80s sci-fi tones, lounge-style Wurlitzer and psychedelic weirdness all spun around the same sense of free-floating melody. Wet and wobbly electric guitar amplifies the effect with a whammy effect often taking it slightly in and out of tune. There's an underlying deliberation beneath the semi-abstract sheen, a balancing act that should be appealingly familiar to fans of The Claudia Quintet.

However floaty it gets, Flown is consistently tied together with a rhythmic pulse at the center. It's not usually a comfortable pulse—there's often a jumpy irregularity a cardiologist would instinctively panic over—but the glitchtronica-inspired bed insistently propels most of the affair nonetheless. "Ask to the Mist" makes a relaxing highlight where everyone coasts in step and (mostly) forgoes the rougher edges. "The Chase" temporarily wanders off the trail into open abstraction before resuming the hunt. The frenetic "Haiti" puts the band's electric sounds through the wringer in classic sci-fi-score style, while the instruments' lines gradually unspool over the album's final extended stretch like wisps of smoke dissipating into the air. Flown has fun pulling and stretching at tonality as much as the sounds of the actual instruments, establishing an ear-challenging identity that never quite sounds like anybody else.

Private Room; Chasin'; On The Bus; Haiti; Off Balance; Ask to The Mist; The Lone Runner.