BY HRAYR ATTARIAN
October 7, 2015
Sign in to view read count 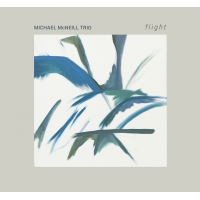 On his second release as a leader Flight pianist Michael McNeill elegantly embellishes his own intricate compositions with bold spontaneity. He imbues the melodic elements of the album with subtle angularity and maintains a strong lyrical sense even while flirting with dissonance.

The contemplative "Za," for instance, has a crystalline harmonic structure within which McNeill has carefully woven silent pauses that enhance its intimacy. His sparse chiming keys and drummer Phil Haynes' low rumble support bassist Ken Filiano's eloquent and elegiac monologue. Out of this emerges McNeill's intriguing phraseology as the two musicians seamlessly swap places in the spotlight. Haynes ushers in the concluding bars with a sophisticated and rhythmically complex solo that enhances the overall introspective mood.

Haynes sets an exuberant ambience on "Wild Geese III: Follow Our Sun" with his dancing beats. Filliano's pizzicato strings hasten the tempo and set the stage for McNeill's ebullient, Caribbean flavored, improvisation. McNeill moves in tightening circles around the main theme as his band mates echo and propel his extemporization forward. A delightfully edgy and agile three-way conversation ensues that reaches a thrillingly virtuosic and evocative climax and then returns gracefully to the head.

With his sophomore effort McNeill has fulfilled the promise of his fascinating debut Passageways (Self Released, 2013). Flight retains the singularity of the first disc but adds to it an emotive maturity and a brilliantly cerebral approach. This results in a simultaneously innovative and accessible album.