By GLENN ASTARITA
July 3, 2013
Sign in to view read count
Track review of "The Duplicate Man" 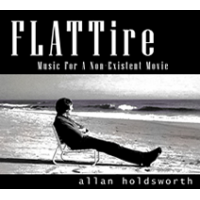 FLATTire was released in 2001 and highlights Allan Holdsworth's use of the MIDI-controller, guitar-like Synthaxe, and is based on a soundtrack for a non-existent movie, marking a period of reflection in the artist's life. However, the album did not receive much attention amid a sparse print run. Here, the guitarist integrates the broad tonal aspects of the synthaxe with his time-honored guitar prowess. He casts impassioned sentiment, and explores the dominion of a film soundtrack, used as a basis for the overall program. His curvy notes, often tinted with a buttery sound are morphed with symphonic clusters, mood-evoking electronics treatments, and melodically focused riffs. Holdsworth mans the ship alone other than late bass great Dave Carpenter's support on two tracks. Thus, the album merges an electro, prog-rock vibe with orchestral voicings and an organic touch, filled with a throng of spikey dynamics and delicate hues.

Holdsworth spins an electronics-classical perspective on "The Duplicate Man." With his synthaxe, he emulates strings and horns with dusky chord-like voicings and employs a polyrhythmic digital drum groove that establishes a hearty momentum via a progressive- rock modality. With polytonal accents and instances of lament and jubilance, he injects trinkets of sound-sculpting maneuvers into this deceptively complex piece, paced with sinewy lines and his renowned legato phraseology. Holdsworth is a master at surging into perilous flights, while tempering the waters with mournful hooks. Indeed, it's a many-sided piece that showcases one of several noteworthy compositions. This proficiently remastered product tenders an engaging alternative to his familiar artistry. It's an album that fell through the cracks back in 2001 and thankfully available in its multihued splendor for the present.