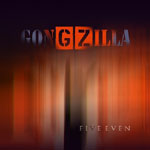 Sometimes you've got to change to survive. Gongzilla—the offshoot of the late Pierre Moerlen's Gong that was an offshoot of the original Franglo group Gong—last released Live (Lolo) in 2001. Even more fusion-centric than Moerlen's Gong, that disc featured GZ co-founders Bon Lozaga (guitar), Hansford Rowe (bass) and Benoit Moerlen (vibes, xylophone) in the company of American power players Vic Stevens (drums) and David Fiuczynski (guitar). While there's no shortage of fusion chops on Five Even, GZ—sans Moerlen —moves into jamband territory, and introduces vocals for the first time.

Adding vocals to an instrumental group can be a dodgy and often suspect proposition, but the reality is that Rowe—a fluid bassist who, while living in Europe three decades ago, recorded not only with Gong but singer/songwriter John Martyn and Tubular Bells (Virgin, 1973) star Mike Oldfield—has always been a singer, releasing the underappreciated solo disc No Other (Lolo, 1999). "Jersey Pines," which appears as both an atmospheric instrumental and a grungy, funkified vocal version on Five Even, first appeared on No Other in fact, though this time the lead vocalist is GZ newcomer Todd Barneson, a rough-hewn singer/mandolinist who, along with drummer Phil Kester and guitarist Jameison Ledonio, round out the core GZ quintet with Rowe and Lozaga.

While the tuned percussion that so defined Moerlen's Gong and GZ is less dominant on Five Even, it's still part of the palette. Kester plays marimba on the breezy instrumental "French Grass," a tune that blends acoustic textures—another new venture for GZ—with its characteristically in-the-pocket rhythm section. Marimba also plays a part on the more harmonically sophisticated title track, which features Garaj Mahal's bassist Kai Eckhardt in one of three guest spots.

But for the most part, as heavy as GZ has been in the past, it's never rocked this hard—though there's still a place for irregular meters ("So High"), jazz-centric harmonies ("American Dream") and transcendent atmospherics ("Willy"). Lozaga's loops create lush soundscapes throughout, sometimes up front, other times nearly subliminal. And while guests like the returning Fiuczynski add some solo weight on "Five Even" and "When the Water's Gone," the disc is more song-oriented than GZ has ever been—and more politicized. With the exception of Lozaga's "French Grass," Rowe is the primary composer, tackling the state of America today ("American Dream"), the environment ("When the Water's Gone") and stoners ("So High"). With seven of the disc's nine tunes stretching past six minutes, there's plenty of time for blowing and flat-out, booty-shaking grooves.

All of which makes Five Even a significant departure for Gongzilla. Still, while its revamped line-up has more in common with Umphrey's McGee, Garaj Mahal and moe than it does with its fusion roots, there is still an underlying rhythmic potency that makes this fit comfortably into Gongzilla's discography. Change is good. Sometimes you just have to make the leap.