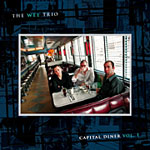 Jazz has a long history of up and coming musicians attempting to incorporate the popular music of their time into the standard repertoire. Some acts have made such ideology their calling card. For example, both the Jacob Fred Jazz Odyssey and Sex Mob regularly include contemporary pop songs in their set lists. As such, the cover of Nirvana's early underground hit "About a Girl" (complete with hyper speed "Rhapsody in Blue" interjections) that opens the Wee Trio's debut album Capitol Diner Vol.1, comes as little surprise.

What is surprising is the depth of feeling and level of emotional intensity that is conveyed in their interpretation; what could have come off as a self-conscious bid for hipster credibility succeeds as an inventively vibrant interpretation of a pop tune by an author whose writing is slowly becoming accepted into the standard repertoire.

At first glance, the combination of vibes, acoustic bass and drums may suggest a nuanced and ethereal sound, of which the trio is able, yet rarely partakes in. Akin to such brethren as the Benevento/Russo duo or The Bad Plus, James Westfall, Dan Loomis and Jared Schonig (vibes, bass and drums, respectively) play with fervent audacity, stretching the kinetic limits of their respective instruments.

The trio is capable of great nuance and subtlety, but is generally more interested in generating a kaleidoscopic swirl of vivacious, swinging energy. Loomis' stalwart bass pulses underpin the group as Schonig's throttling trap set palpitations provide the fuel for Westfall's cascading lines and effervescent accents; buoyant and vigorous, their enthusiasm is palpable.

The machine gun drum fills of "The Ghost of Potato Creek Johnny" and the spry bop rhythms of "Pisces" careen with finger snapping abandon, while a passionate reading of "There is No Greater Love" and the bittersweet "Song for Harry Potter" showcase the trio at their most evocative. Sufjan Stevens' winsome "Flint (For the Unemployed and Underpaid)" demonstrates the trio's lyrical restraint, while Thelonious Monk's "Wee See" is given a riotous reading as the album's climactic finale.

Capitol Diner Vol. 1 is tentatively the first release in a continuing saga from The Wee Trio. Here's looking forward to Vol. 2.