BY IAN PATTERSON
September 13, 2014
Sign in to view read count 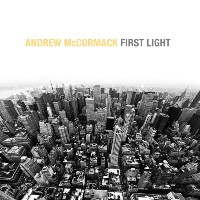 English pianist Andrew McCormack came to wider attention in the UK with his debut Telescope (Dune, 2006) and his subsequent Rising Star BBC Jazz Award. McCormack was already an established figure on the London jazz scene through his association with Tomorrow's Warriors and J-Life though a decade on he's probably still best known as a sideman in the bands of Denys Baptiste, Jean Toussaint, and Gary Crosby's Nu-Troop, as well as for his duo collaborations with Jason Yarde. That may be about to change with McCormack's impressive follow-up, which captures the energy and flow of New York, where the music was written and recorded.

Now resident in the Big Apple, McCormack seems genuinely inspired, both by his new environment and by the two musicians who contribute so much to the appeal of First Light, namely bassist Zack Lober and bassist Colin Stranahan. The interplay of the three musicians is exceptionally tight, leaping from their marks in perfect unison on the intros to "Prospect Park"—a lively introductory calling card where all three stretch out—and on the impressionistic "First Light," an endearing ballad of rhythmic subtlety and melodic charm. McCormack's solo on the latter, alternatively romantic and rhapsodic, is an album highlight.

In the main, however, McCormack's compositions bear a quite personal seal. The seductive "Little Faith" owes more to the swing and blues traditions, underlining McCormack's penchant for penning memorable melodic hooks. "Reluctant Gift" shows the trio at its most dynamic, with the leader's lightning runs buoyed by fast-walking bass and spitting ride cymbal. A bass/piano unison motif launches Stranahan on a fiery extended solo before the trio returns to the head a final time.

A punchy rhythmic groove frames "The River," a standout track of simmering intensity where McCormack gives reign to his considerable chops. The leader's playing exudes wintery impressionism on the solo piano miniature "Faith Remembered." The one cover of the set, Thelonious Monk's upbeat jaunt "Pannonica" sounds a quietly celebratory final note in a nod to one of jazz's most enduring and influential figures. McCormack succeeds in putting his own stamp on this Monk standard, with final rallying cries from Lober and Stranahan to boot.

It will be interesting to see to what degree McCormack throws himself into leading his own projects from here on. Moving to New York is already a significant statement of intent, and if the accessible yet sophisticatedFirst Light is anything to go by, then his new adventure is likely to return even greater fruits in the years to come.