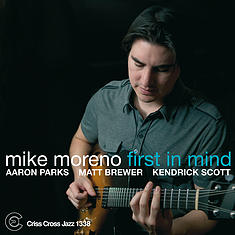 First In Mind, Mike Moreno's sophomore effort for the Criss Cross label, finds the 31 year-old guitarist interpreting songs both old and new. He explores selections from his former band mate Joshua Redman and one by upcoming singer/songwriter Josh Mease; Milton Nascimento and Miles Davis receive attention, too. It's an eclectic mix, but one wrangled into a consistent program via his sharp musical aesthetic.

Pianist Aaron Parks once again serves as a foil for the guitarist. Over the years, the pair has developed a strong musical affinity: Moreno was featured on Parks' stunning debut, Invisible Cinema (Blue Note, 2008), and Parks appeared on Moreno's own debut, Between the Lines (World Culture, 2007). Together, they pursue a new type of romanticism, a sound punctuated by lush arrangements and plaintive melodies easily comparable to that pioneered by Pat Metheny and Lyle Mays in the early '80s, a style most evident in the moody retelling of "In A Silent Way."

Moreno plays electric guitar on most of these tracks (on a custom-built Marchione that he helped design) except on Redman's "Soul Dance," where he switches to acoustic. His improvised lines often explode into a dense maze of notes, but sometimes they taper at their peak. This ability to skim past vast reservoirs of technique in pursuit of a greater melodic purpose is a distinguishing characteristic in his playing.

First in Mind  boasts a sterling rhythm section and many high level performances, yet its success owes more to the overall sound, one both melodic and easy to digest—a quality that can, by now, be expected from any Moreno project.

First In Mind; Soul Dance; Airegin; By Myself; But Beautiful; Milagre Dos Peixes (Miracle Of The Fishes); A Flor E O Espinho (The Flower And The Thorn); In A Silent Way; Mantra #5.