By Hrayr Attarian
September 5, 2015
Sign in to view read count 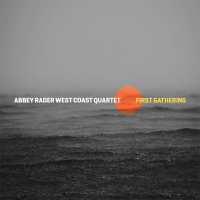 With the provocative First Gathering, drummer Abbey Rader unveils an intriguingly new musical approach. Over the past decade or so Rader has consistently utilized two woodwinds on his recordings with saxophonists John McMinn and Noah Brandmark filling those roles on his last three sessions. Rader's current West Coast Quartet features reedmen Peter Kuhn and Drew Ceccato whose style is more expansive, rarified than McMinn and Brandmark's earthier, denser sound yet equally adventurous.

The record is organized in a progressive fashion with the earlier tracks serving as sort of etudes to the sublime fourth one. This is not to indicate that the first three are in any way incomplete or lacking in substance or structure. But they explore motifs later woven into the harmonic structure of the last tune.

The riotous "Foreign Dust" for instance features a delightful, ensemble cacophony of spontaneous expression. Kuhn's clear acerbic alto rushes over the stormy rhythms while Ceccato's baritone honks and howls like a squall. Likewise the saxophonists repeat their energetic duet, this time laced with bluesy hints during the joyous midpoint of the disc's closer.

Ever the bold experimenter and consummate improviser, with First Gathering Rader has created his most spiritual work for sometime. Kuhn and Ceccato are as perfectly matched as McMinn and Brandmark were and they too share Rader's creative concept. An imaginative and artistic vision that Motl anchors and Rader propels to a new level with each consecutive release.