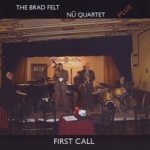 Veteran Detroit jazz musician Brad Felt has been championing the role of the euphonium and tuba as front-line instruments for over thirty years. Felt has an extensive sideman résumé, having performed with notable artists such as Roy Brooks, Martha Reeves and Howard Johnson's Gravity. First Call is an introduction to Felt's progressive jazz ensemble Nu Quartet Plus, featuring saxophonist and longtime musical associate Steve Wood.

Felt composes with an intriguing playfulness, building on rhythmic motifs and cleverly engaging euphonium and saxophone to develop his themes, all with an underlying propensity to swing. The blazing, bebop-inspired unison lines of the opening title track and straight-ahead flavor of "Invocation" contrast nicely with the layered entrances and harmonic spread of "The Truth About You" and sneakiness of "Surface Dwellers," with touches of intuitive, free-form blowing.

Bassist Nick Calandro—whose lyrical approach is an integral part of the ensemble—introduces the sly funk of "Explode the Modular," an appealing track with a simple motif bounced back and forth between Felt and Wood on soprano sax; a blending that works exceptionally well. Here, drummer Bill Higgins executes a dynamic sense of interplay and pianist Gary Schunk delivers a solo of astonishing single-note runs, bordering on the ethereal.

The Latin-tinged "If You Came to Me For Love" has an accessible appeal and contains exceptional solo turns, especially from Felt. The closing "High Contrast" takes shape with a kind of controlled approach to group improvisation. Indeed, in marked contrast, the tune eventually settles into an up-tempo burner based on the changes to "What is This Thing Called Love?" Wood, Felt and Schunk each wind their way emphatically through multiple choruses until the opening section is eventually re-introduced.

First Call is a bold musical undertaking from an empathetic cast. As a composer and performer, Felt's vision, steeped in the traditions of Detroit, is forward thinking and deserving of wide recognition.