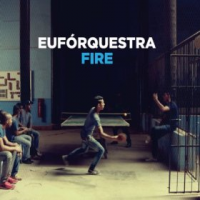 Although Fire is their fourth studio album, it also marks two milestone "firsts" in the history of jam masters Euforquestra: The band's first studio album since the live album Let Us In straddled their 2009 relocation from Iowa City, Iowa, to Fort Collins, Colorado; and their first studio album managed by an external producer, keyboardist Kyle Hollingsworth from The String Cheese Incident. "Kyle helped with pretty much every aspect of shaping songs for this record," explains group guitarist and vocalist Matt Tallman. "He edited lyrics and song forms; he helped with bass lines, guitar parts, saxophone melodies, etc. He really did a little bit of everything." Other guests include trumpeter Gabriel Mervine (from The Motet) and vocalists Elliot Martin (from John Brown's Body) and Kim Dawson.

Like most of this set, its first two tunes—"The Price is Right" and the title track—swivel-hip from Tallman's snaky rhythm guitar and pungent horns that blast their arrangements like a roundhouse gut punch. The rollicking instrumental "Momo Lolo" washes up from the rhythmic shores of New Orleans, full of snare rolls and cymbal splashes from drummer Craig Babineau and chili pepper solos by guitar and trumpet, all culminating in a joyous, tumultuous closing collective jam. More topically, "64-18" tells, in Little Feat funk and rock, the tale of the November 2012 vote that legalized recreational marijuana in Colorado: "They're passing it easy, they're pushing it through/ Now 64-18 is funding your schools."

The hot, sharp and potent instrumental "Instant Coffee" is more than nicely titled; its horns sing the melody in unison, break apart into individual solos, and then come back together like a classic Tower of Power or Average White Band chart. "Instant Coffee" spills over into "Road Funk," Eufórquestra's ode to all the funky stuff that seems to come with band life on the road, rumbling like a packed equipment truck along Tallman's rhythm guitar and a percussion breakdown so hot that you can nearly hear steam rising off the skins.

"We want to spread this album as far as we possibly can and then go to all those places so we can perform for the people there," Tallman envisions. "This record feels like a milestone moment for the band and we want to take advantage of the positivity and momentum behind it."