Triptet: Figures in the Carpet 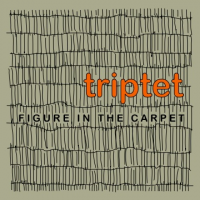 Triptet's music is hard to categorize within one particular genre. The Seattle based group's second release, Figures in the Carpet, is a unique cross between the hypnotic ambience of synth-pop and avant-garde jazz's complex and dissonant harmonies. Elegiac and mystical motifs and free-flowing spontaneity endow the album with a thematic unity.

The deconstructed lullaby "Surfactants," for example, opens with wistful chimes over waves of robotic drone and other sonic effects. French hornist Greg Campbell, with his vibrato-filled sound, joins saxophonist Michael Monhart's unfettered soprano in an angst-filled duet that fuses into swirls of an otherworldly din.

Perhaps the most cinematic of all the pieces is "Tuning the Blue City." With Its mixture of heavy thuds of deeply resonant drums and swells of electronic modulations it could easily serve as a film soundtrack, albeit one directed by David Lynch. This darkly hued fantasy features galloping rhythms through deserted urban soundscapes filled only by the ominous jangle and moan of automated machinery.

The album is much more than just atmospheric accoutrement. The ambient reverberations serve as a background to intricate improvisations. Campbell's mellow horn flows out of the murky tonal storm of the title track, eloquently punctuating his band mates' refrains. Monhart's edgy and energetic tenor solo emerges out of the rumble of "External Rhyme," while Baker's assertive guitar leads a charged extemporization out of the roar of "The Myth of the Ordinary Man." The tune, characterized by percussive African sensibilities, closes with a delightful and stimulating cacophony, reminiscent of some of Art Ensemble Of Chicago's work.

This intriguing disc by an intelligently creative trio is clearly not for mainstream consumption. Its mixture of abstract intellectualism and visceral emotionality is, however, immensely rewarding for those more open-minded.

External Rhyme; Gates of Glass; Figure in the Carpet; Palimpsest; Rain Tractor; Ode to the Nightwatchman; Under Land; Tuning the Blue City; The Myth of an Ordinary Man; Surfactants.