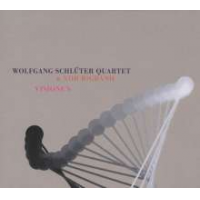 Visionen may be the best big band recording that went largely unheard in 2012. The music itself was hiding in plain sight, available for purchase from the usual on-line mega-stores (i.e. Amazon.com) and download sights (i.e. iTunes), but the record received scant attention in jazz circles, and the majority of the attention it did receive came from sources fairly close to home for this Hamburg-based project.

Wolfgang Schlüter—Germany's elder statesman of the vibraphone—and his highly interactive band, which often stands apart as the Hammer Klavier Trio, joined forces with the NDR Bigband for this mostly-originals affair, and the results are mind blowing. Schlüter, who'll turn eighty in November 2013, seems to be ageless; at times it's hard to tell if he's feeding off of the energy from the rest of the musicians or feeding them the energy himself. His quartet mates, who complete the inner sanctum within this assemblage, deliver complementary and compelling performances that push this music to its limits, and the NDR Bigband adds weight, depth and color to the whole production.

Everything from pure power to unadulterated beauty comes out during this varied eight-song program. The album sets sail with an angular, European slant on bop ("Albert"), but quickly moves on to other arenas. "Alhama," which may be the most impressive track on the record, shifts between Moorish strains and brighter colors, coming off like a marriage between Gil Evans' writing on Miles Davis' Sketches Of Spain (Columbia, 1960) and the bright-hued work of Maria Schneider. Two different sides of the waltzing coin are on display during the spirited "Crazy Little Family" and peaceful "Der Poet," and the music kicks into high gear with "Cherokee." The absorbing "Ballad For Lungi" and haunting "Visionen" visit the softer side of the sound spectrum, as beautiful and weightless winds merge and lay a downy cushion that supports solo excursions. "Donna Lee," which shifts between backbeat driven backing, swing, and a Latin-leaning groove, is the only number that isn't wholly satisfying; it never really has a chance to find its rhythmic footing.

Much of the beauty of this music is in the arrangements, but the breakout sections that put the small group and soloists out front are equally important to the success of the project. Schlüter and pianist Boris Netsvetaev prove to be the star performers, but they're hardly the only standouts. Bassist Philipp Steen shines in a few places, drummer Kai Bussenius completely dominates during "Cherokee," and various members of the big band pop in for a spot of soloing here and there.

The virtues of Visionen are many and its drawbacks are few, making it all the more baffling that this record was lost in the sea of splendid releases. Here's to hoping that more than a few people find this album in the near future.