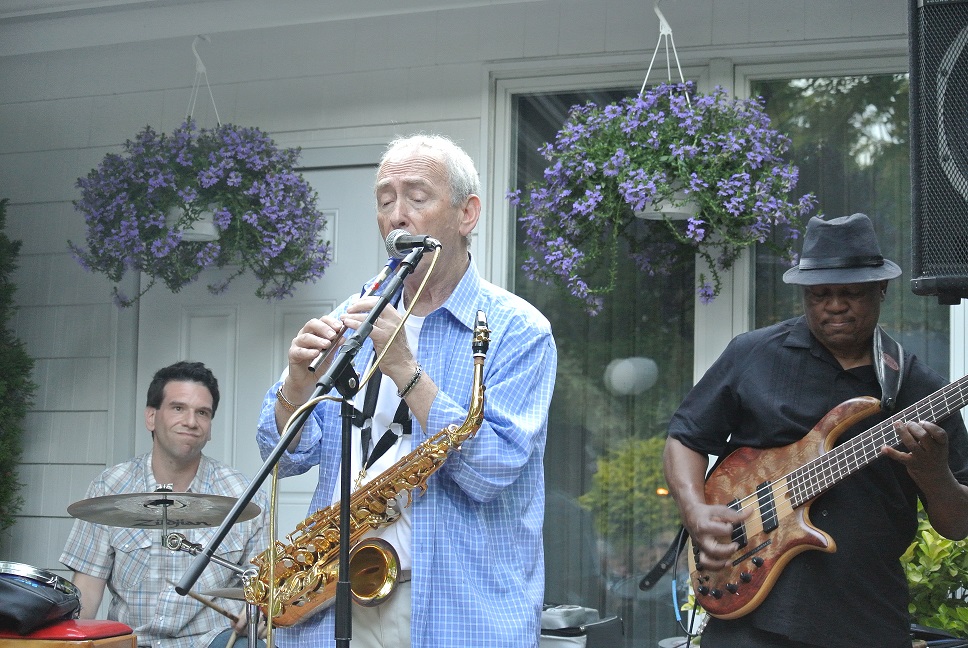 By Dan Bilawsky
July 9, 2013
Sign in to view read count
Fieldstone Jazz Festival
Great Neck, NY
June 29, 2013
While jazz is often performed in spaces befitting its stature—like theaters, auditoriums and swanky supper clubs—it also has a very long history as an alternative venue-housed art form. Over the past century, it's gone from the brothels of New Orleans to the rent parties of Harlem to the lofts of avant-garde artists to the homes of jazz patrons looking to support the music and bask in its glow.

The very idea of a concert in the home—the so-called "House Concert"—has become a popular, grassroots way of spreading the jazz gospel within a given community. In many ways, it serves as an extension of earlier efforts to present this music where and when possible, but the host locations aren't houses of ill-repute anymore. Nobody's looking to pay their mortgage by hosting such gatherings, and it's not always about pushing musical boundaries, it's simply about supporting and enjoying what jazz has to offer.

Every house concert helps to expand the visibility of jazz beyond its normal/standard parameters, but each and every person that hosts such an event has their own reason(s) for doing it. For Neville and Velma Grusd, the idea to create such a gathering was born of a desire to keep jazz alive in the great-and-beautiful outdoors. For many years, the Grusds would attend outdoor jazz concerts at Oyster Bay's Planting Fields Arboretum, but those events eventually ceased to exist. As a way to fill the void, Neville and Velma decided to simply bring the music into their own backyard on Fieldstone Lane; thus, the Fieldstone Jazz Festival was born.

Since its inception in 2009, this event has focused on the work of South African saxophonist Morris Goldberg. Goldberg—a New York-based Cape Jazz pioneer who appeared on Abdullah Ibrahim's Mannenberg—Is Where It's Happening (As Shams, 1983), and later brought the pennywhistle to pop audiences on Paul Simon's "You Can Call Me Al"—goes back a long way with the Grusds. They knew each other during their time in South Africa and became reacquainted years later on American soil, so when it came time to put together their first fête, Goldberg was the obvious choice. At that initial gathering, Goldberg simply came with a singer and some prerecorded music in tow, but the band grew each year under the auspices of the Grusds. For the 2013 edition, Goldberg arrived with a crack quartet featuring South African bass icon Bakithi Kumalo and guest vocalist Tsidii Le Loka—best known for originating the role of Rafiki in the original Broadway production of Disney's The Lion King.

The Fifth Annual Fieldstone Jazz Festival got underway on a pleasant Saturday evening that managed to keep the seemingly ever-present rains of the season at bay. The Grusd's friends and fellow jazz-lovers filed into their backyard, milled around, and chatted amiably as guitarist/vocalist Peter Frank provided some pre-concert music, but the main event brought everybody to their seats. Goldberg kicked things off with Horace Silver's "Song For My Father," which took flight with his sly saxophone doing the talking while drummer Mark Portugal turned his snare drum into a hand drum. The energy level continued to rise as solos were passed around to keyboardist David Bravo and Kumalo, finally culminating with some explosive trades between the various band members and Portugal. Goldberg switched gears—and instruments—for "Rockwela," which he co-wrote with Late Show with David Letterman drummer Anton Fig. His pennywhistle brought a pronounced sense of joy and sunshine to this buoyant performance, which was followed by a slice of funky pop-jazz in the form of Bravo's "Criss Cross My Heart."

At this point in the show, Tsidii Le Loka joined the band for a pair of numbers that referenced her Broadway work ("The Circle Of Life") and the great Miriam Makeba ("Malaika"), her potent and dramatically pointed vocals immediately winning over the crowd. When she left the spotlight, the quartet continued on its way with Neville Grusd's fun-and-slinky "Tahiti Beach." Portugal's groove-cum-solo stole the show on this one, morphing into a Mozambique-esque pattern at one point and turning around completely. Portugal took a back seat on the followup, Goldberg's "Dolphin Jive, as the rest of the band members each had an opportunity to stand in the figurative spotlight. Le Loka returned to the microphone for some more music, keeping the band and the audience members on their toes this time with some of her off-the-cuff artistic decisions. Goldberg and company had little time to rehearse with Le Loka before the performance, which resulted in a few bumps in the road on the ballad-esque "Ntjilo Ntjilo" and the audience participation-infused "Jikele Medley," but these minor issues couldn't dampen the spirit surrounding the music.

The majority of Goldberg's set was given up to the presentation of South African-sourced jazz, but the evening came to a close with visits to two very different locales—"Spain" and "Kansas City." Goldberg wryly introduced "Spain" by noting that many people in the crowd had likely heard the tune before, but they probably hadn't heard it performed on a pennywhistle; he then launched into the Chick Corea classic—and never looked back. The piece peaked with Kumalo's stunning bass work and vocal chants and a potent vamp in seven that gave Portugal a chance play out. When "Spain" ceased to be, Kumalo briefly entertained the crowd before Peter Frank came to the microphone for the show-ending "Kansas City."

The Grusds—ever the gracious hosts—provided a late dinner for their guests when all was said and done. The performance, which exceeded ninety minutes, seemed to come to an end far too fast, but the spirit of the music hovered in the air for the remainder of the evening.