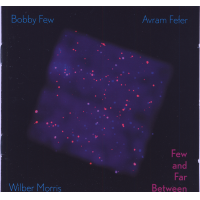 Sometimes you hearken back to the old days to a time when musicians used music to really explore. Songs were songs and men were men. The greatest contribution of the '60s "New Thing" were players firmly rooted in the tradition of composing but adept and bold enough to write music for successful and innovative improvisation. Those times may have passed but New York stalwart Avram Fefer hasn't given up their lofty ideals yet. Fefer's latest disc on Boxholder is actually two years old and is a historical document rather than an indicator of his current work. Featuring avant-garde legend Bobby Few, Few and Far Between (it must be great to be named Few or Miles or Mann and have endless catchy album titles available) was recorded during Few's brief New York visit for the 2000 Vision Festival. Few and Fefer's relationship began in Paris several years before, yet this one-off gig was the first time this particular trio had played together. The rough quality to both the playing and recording adds charm to the moments of inspiration over the course of this hour-plus set. Whether going drummerless was intentional or due to short notice, the freedom and exploration extant might have been stymied by even the most adept timekeeper. The album features compositions by each musician: Few's rollicking and rambunctious "Continental Jazz Express" (played solo by Few at the 2000 Vision Festival, documented on the Boxholder release of the same name); the slinky "Chazz" by bassist Wilbur Morris which certainly recalls the work of its namesake; Fefer's mellow and melancholy "Loss (for Flo)" and an ambitious take on Mingus' "Nostalgia in Times Square". What sets this disc and Fefer apart is the masterful songwriting. Fefer can go out with the best of them but chooses to do it with something substantial to return to. Few's credentials as an out player are unquestionable yet he mixes atonality with tastefulness throughout, a mark of a great talent. Like Mingus (whom Fefer likes to cover), Few and Far Between shows that heading forward doesn't always preclude looking back.

ADVERTISEMENT
This review first appeared in the August 2002 issue of All About Jazz: New York .