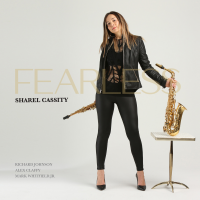 Offering her fifth album as leader, saxophonist Sharel Cassity unveils an aptly titled collection of originals and a couple of standards in an album of special significance and meaning in her life, as she confronted a personal health issue that threatened to silence her musical voice forever. This project is not only about producing a delicious bebop sound one will not soon forget but, it is also a testament to her faith and courage in confronting an illness she refused to fear, and finally defeated.

Except for Ray Noble's classic standard "The Very Thought of You," and pianist Richard Johnson's finale tune "Last Minute," Cassity presents seven new originals she penned for this recording while battling Post Lyme Disease. Besides piano man Johnson, also accompanying the saxophonist on this musical journey are Alexander Claffy on bass and Mark Whitfield Jr. rounding out the quartet on the drums.

Holding nothing back, Cassity and crew open up with the rapid-tempo up beat burner "Whimsy" which, adequately describes the fanciful and playful performance of the leader and band on an explosive starter. The title track is no less fearsome just a tad more serious as the saxophonist wields her instrument with force. The bebop sound is in full swing on "North Street," as the mood shifts to a Middle Eastern style reflective of the time the leader lived in Qatar which inspired "Road to Dukhan.

The music takes a softer turn on "Surrender" which highlights bassist Claffy and the pianist on marvelous solo moments. The gentle side of the set continues on the "Ballad for Roy," followed by Cassity's unique version of "The Very Thought of You," and though composed as a ballad, there's plenty of fire from the leader and band on this one.

The brief but moving "Not a Samba" contains slight elements of the Afro-Cuban flavor with the leader on soprano and drummer Whitfield Jr. driving the percussive flair of the piece. Taking to the tenor on the finale ("Last Minute") the saxophonist and cast deliver another blistering performance bookending the session with a lot of heat.

Loaded with exceptional solo moments from everyone in the quartet, Fearless is an exciting, swinging and vibrant documentation of bebop at its best. Sharel Cassity provides a heart-felt performance drawing from her inner strength and will in conquering a personal obstacle with a musical sword and an intrepid assurance.

Whimsy; Fearless; North Street; Road to Dukhan; Surrender; Ballad for Roy; The Very Thought of You; Not a Samba; Last Minute.