Offering her fifth album as leader, saxophonist Sharel Cassity unveils an aptly titled collection of originals and a couple of standards in an album of special significance and meaning in her life, as she confronted a personal health issue that threatened to silence her musical voice forever. This project is not only about producing a delicious bebop sound one will not soon forget but, it is also a testament to her faith and courage in confronting an illness she refused ...

Freedom of Expression: Interviews with Women in Jazz by Chris Becker

Since she relocated to New York City in 1999, the steadily building career of this Oklahoma native includes a Bachelor's from the New School and a Master's at Juilliard. Sharel Cassity studied under a number of renowned saxophonists and recorded two CDs. The second, Relentless (Jazz Legacy, 2009), received a 4-star review in Downbeat, whose Critics Poll has consistently cited her as a Rising Star on alto sax. Her career includes performances as a leader at well-known venues, as well ... 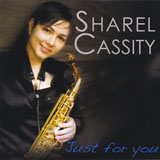 Crafting a wide range of bop-infused musical styles and playing odd-metered grooves on familiar standards to original compositions, alto saxophonist Sharel Cassity presents her recording debut as leader with a truly enticing session of jazz that is Just for You. Based in New York and an educator by profession, Cassity academically trained at both the New School and Juilliard, and is a talented woodwind specialist who also performs on all saxophones, flutes and the piccolo. On this album however, she ...