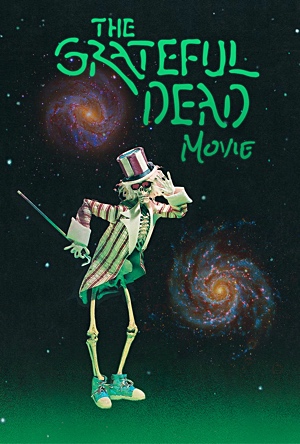 2017's Grateful Dead "Meet-Up at the Movies" was comprised of a number of disparate elements, the amalgamation of which, in a fashion typical of this iconic band, carried a logic all its own. This multi-leveled presentation by Fathom Events may or may not have been lost on the nearly-capacity audience in South Burlington, Vermont's Palace 9 Theater—there was, after all, scant recognition of the significance of its 4/20 date—but there was no denying the near-capacity audience's engagement with the main content which provoked loud applause plus whoops and hollers at more than a few points.

The main feature of this annual event was a showing of The Grateful Dead Movie to celebrate the fortieth anniversary of its debut in theaters (alas, without any ostensible technical improvements a la the DVD release of 2004). The impending release of archival material from the mythic 1977 spring tour of the Dead, hawked on-screen more than once, dovetailed nicely with that chronology. However, in a testament to the consistency of the group's performances as much as the fans' loyalty the mini-documentary, consisting of interviews with some of those present at the legendary Cornell show, didn't clearly elucidate that date's distinction anymore than corresponding segments in the main film.

The continuity was thought-provoking, particularly in light of bassist Phil Lesh's recent comments questioning the level of the band's post-break musicianship. Similarly eye-opening was footage of the audience in the Winterland venue which, apart perhaps from the style of eye wear from the period, might just as well have been shot contemporaneously, at a Phish concert perhaps, or even during one of the latter-day Dead & Co. shows (from which a concert excerpt appeared prior to the movie itself, in yet another sly marketing move, reminding us of that group's upcoming summer tour).

While those aforementioned segments effectively functioned as short subjects preceding the main feature, The Grateful Dead Movie actually contains such a preface of its own at the beginning, in the form of an animated that's an extension of the form introduced with The Beatles' Yellow Submarine. Mercifully short and only to return in quick snippets later in the film, it's a lighthearted introduction to the concert footage that comprised the bulk of a film, directed by the Dead's titular lead Jerry 'Garcia, in his words, designed to capture the whole of the band's experience and history (there was question, at the time of these 1974 dates whether the band would continue at all afterward).

Whether the film fully succeeds on that comprehensive front or not, it does touch all the bases of the milieu that gave birth to the jamband ethos. Besides inclusion of period shots such as the demolition of San Francisco's Mars Hotel from which the Grateful Dead took an album title, there's also some insight into massive logistics involved in erection of the "Wall of Sound" system plus varied perspectives on the mottled dynamic of their fans (among whose number included the late Bill Graham, promoter of these concerts ) inside and outside the Winterland venue where the over five-night run took place.

Enlightenment on the band's internal politics is even more revelatory in hindsight: Garcia's recollection of throwing Lesh down some stairs in an exercise of frustration over a show earlier in their history counterpoints the bassist's latter-day comment that he was against the proposed retirement at the near decade mark of the band's existence. The bassist's perspective is certainly understandable, at least insofar as he preferred not to derail their cumulative momentum: there's no denying the elevated level of musicianship as it had evolved over the course of three years with Keith Godchaux on piano and Bill Kreutzmann as the single drummer (his partner Mickey Hart eventually shows up on the final night).

The Dead's playing here is almost equally economical and expansive, depicted in something of the reverse order of a concert's natural progression, beginning with the rousing "Sugar Magnolia" and concluding, appropriately enough given its mournful tone, with a song of great significance to those interviewees in the documentary, "Morning Dew." The quality of material such as "Eyes of the World" was another major source of inspiration, perhaps given short shrift in the film with but one quick shot of lyricist Robert Hunter and only the most lighthearted segment featuring rhythm guitarist Bob Weir and his songwriting partner, John Perry Barlow.

Much of the rest of the motivation no doubt derived from the devotion of the community surrounding the Grateful Dead, at this point early Seventies point something of an albatross on the group as described by lyricist Barlow. His statement, not to mention the group's decision at that time, remains more than a little ironic given their continuing appeal in the form of these annual cinema events, the ongoing touring success by the present-day ensemble, not to mention the continuing (and widespread) merchandising of the band's brand.

Still, it's difficult, if not impossible, to be as cynical as the one agitated audience member arguing the business aspects of this cinema project at a concessions stand during one of these shows: he's far outnumbered by those present, blissed out in one way or another, and rightly so: the bulk of The Grateful Dead Movie displays a group that, in performance, was enjoying itself as profoundly as most of the members of the audience.