By Dan McClenaghan
November 26, 2008
Sign in to view read count 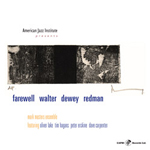 It's hard to believe that Dewey Redman isn't still around when listening to Mark Masters Ensemble set, Farewell Walter Dewey Redman. Masters and the group—especially alto saxophonist Oliver Lake—capture the soul and sound of the unsung tenor titan on this marvelously inspired recording.

Dewey Redman (1931-2006), the father of saxophonist Joshua Redman, is probably best known for his work with Ornette Coleman on albums like The Science Fiction Sessions (Columbia Records, 1972) and New York is Now (Blue Note Records, 1969). To those fans familiar with his work, he is best known for his sound. His tenor saxophone was one of the most distinctive noises in jazz—an often gruff, growling, testosterone-laced, up-from-the-gut roar, identifiable from the first note. His opening growl on the little-know but classic free jazz outing Momentum Space (Verve Records, 1999) , with Cecil Taylor and Elvin Jones, sounds like a grizzly bear coming out of hibernation, looking for something or somebody to chew on.

Masters had planned to record this set with Redman in 2006, but the saxophonist passed away that year, so alto saxophonist Oliver Lake was chosen to fill the lead sax role. It was an inspired choice. Lake seems a kindred soul to Redman, with an approach of over-the-edge looseness and sharp, declarative (sometimes bellicose) exclamations that always seem on the verge of veering into untamed noise, without ever doing so. It's a style of playing that—as Dewy Redman always did—keeps things on a sharp edge.

Masters' arrangements allow the freedom for solos that are creative in the extreme, from Lake especially, and also from trumpeter Tim Hagans, trombonist Dave Woodley and multiple reedman Gary Foster. Masters has made something of a career this century successfully exploring different artists and aspects of jazz, from Porgy and Bess Redefined! (2005), to The Clifford Brown Project (2004), as well as One Day With Lee (2004), featuring alto legend Lee Konitz, and Wish Me Well: Reflections on Gary McFarland (2006), all on Capri Records. A Farewell to Walter Dewey Redman, with it's beautiful sixteen piece ensemble harmonies—Ellington comes to mind at times—and inspired and adventurous soloing, is jazz at its finest.