BY LAWRENCE PERYER
November 8, 2011
Sign in to view read count 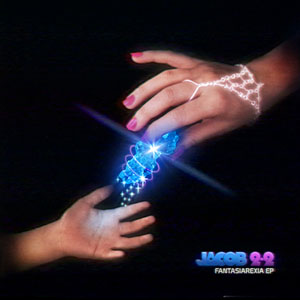 After lighting up the indie blogosphere at the beginning of 2011 with his six-song EP, Cabazon (Moodgadget Records), DJ and producer Jacob 2-2 is back with Fantasiarexia, featuring more of his 1980s-derived electro funk. Drawing from a well of inspiration that includes not only Herbie Hancock, Jean Michel Jarre and Windham Hill but also film, TV and commercial incidental music. The veil of nostalgia hangs heavily over this music.

The trip backward begins with the artist's own name, "Jacob Two-Two" being the protagonist in a series of children's books by Mordecai Richler. This is the nostalgia of the 13th Generation, Robert Capa's Generation X: people who came of age in a time when the most powerful computers still had tape reels affixed to their fronts; when latchkey kids with self-absorbed Boomer parents were trading their Star Wars Underoos and sleepovers for parachute pants and trips to the shopping mall; when the drinking age was eighteen; and when abortion was the middle class teen's birth control method of choice (or so said the coming-of-age films of the day).

Vintage synthesizers and drums machines dominate the preceding, with all of the big names of the era in the house: Korg, Moog, and of course, Roland. Their Juno 6 keyboard, with beats courtesy of the TR-808 drum machine, has been the workhorse combo for electro artists since at least Afrika Bambataa.

Parts of this record are like stumbling across an old top-loading VHS machine running tape loops of the motion graphic sequences that wrap late-night movies and syndicated TV shows—all synth sweeps and swirling colors. Other times, it's classic electro jams in the style of Arabian Prince or Egyptian Lover. The artist has described his mission as finding the "missing link between '90s hip-hop and '80s new age/prog." Mission accomplished, Jacob.

With 1950s "vision of the future" techno-optimism, Jacob 2-2's Fantasiarexia is vintage and familiar, robotic yet warm, and cheerful about its nostalgic melancholy.