By Bruce Lindsay
November 19, 2012
Sign in to view read count 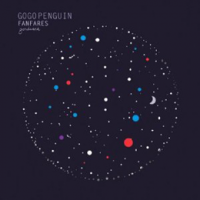 Jazz musicians are some of the most musically imaginative souls on the planet, but their imaginations often desert them when it's time to choose a band name. So thanks must go to whoever decided to name this group GoGo Penguin: it's a suitably imaginative name for a trio full of imaginative music. Three young men who met at the Royal Northern College Of Music in Manchester, with a sound that combines jazz, dance music, electronica and rock: that's Gogo Penguin. Fanfares, on Manchester-based trumpeter Matthew Halsall's Gondwana Records, is an emphatic opening statement for the trio's career.

GoGo Penguin may be a piano trio, but it's by no means a piano-led trio. Grant Russell takes on more than the usual bassist's share of the melodies. Drummer Rob Turner's constantly inventive percussion reveals new joys on repeated listening. The tunes are all originals—the rather minimalist sleeve notes don't give credits for individual tunes, suggesting that they may all be group compositions in some shape or form, and the equally minimalist band website isn't giving much away either.

There are attention-grabbing tunes and performances throughout Fanfares. "Seven Sons Of Björn" wears its influence on its sleeve: the title giving a strong hint, the music—driving, energetic, full of movement—making it clear. This is GoGo Penguin's tribute to the Esbjorn Svensson Trio (e.s.t.). Elsewhere, there are resemblances to pianist Neil Cowley's Trio ("Fanfares") and to Phronesis ("I Am That"), two bands that also share GoGo Penguin's openness, drive and passion.

The hypnotic "Last Words" is underpinned by pianist Chris Illingworth's repetitive three-note bass line, the melody shared between Illingworth's right hand and Russell's bounding bass while Turner's busy, skittering, drumming displays a resemblance to the style of e.s.t.'s Magnus Ostrom. "Unconditional" is another tune built around a hypnotic groove but it's a gentler affair altogether; Russell and Turner keep things cool while Illingworth takes the lead role on this beautiful and melancholy piece. "Akasthesia" begins with Russell's confident and soulful bass solo, becoming a brief drum and bass duet and, with Illingworth's entrance, opening up into a graceful, expansive melody. The punchy, assertive "HF" demonstrates GoGo Penguin's more muscular side, yet Turner's arco playing on the tune has a spectral beauty.

So, GoGo Penguin gets the award for Band Name Of The Year: an impressive accolade in itself, but of little consequence if the band were to fail on a musical level. But Fanfares doesn't fail; this would be an impressive fourth or fifth album, let alone a debut release. 2012 year end Best Of lists await.

Seven Sons Of Björn; Last Words; Unconditional; Fanfares; I Am That; Akasthesia; HF.