By DAN MCCLENAGHAN
May 1, 2021
Sign in to view read count 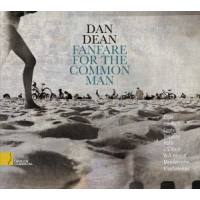 To be clear here: these multiple voice sounds are created using one voice—Dan Dean's, portraying the sounds of the timbres of brass and string instruments via the studio wizardry of layering and overdubs, laid down painstakingly one part at a time then assembled into a symphonic complexity and grandeur. Works from the pens of J.S. Bach, Debussy, Mendelssohn, Mozart, Holst, Copland and more unfold with reverence for the tradition combined with the audacity of a strikingly novel approach to presentation.

In his liner notes for Fanfare For The Common Man, Dean writes of drawing inspiration from his behind-the-wheel classical radio station listening sessions during his drive-to-the-studio commutes in Seattle, absorbing the sounds as a balm of sorts during the frustrating stop-and-start sludge of logjam traffic, timeless sounds serving up a soothing effect. That has transferred to this recording. A lights dimmed, late night kicked-back-in-the recliner spin of this music says Fanfare For The Common Man sounds like an inevitable work of art, centuries old (Mozart, Bach), summoning embedded-in-the-DNA Gregorian chant harmonics from a thousand years ago, radiating a calming sense of spirituality and wonder.

From Gustav Holst's early twentieth century work, Planets, we hear "Mars: The Bringer of War," with its dense brass approach, requiring Dean to generate the needed timbres via precise tongue placements on his palate—nearly sixty tracks of this layered into a majestic and brash massiveness. And Dean turns to J.S. Bach, as he did for two tracks on Songs Without Words. He visits the master four times here, including renditions of two of the man's most recognizable works, "Brandenburg Concerto #3 in G major, Allegro" and "Cantata "Jesu, Joy of Man's Desiring." proving you can't get enough Bach. (What's the old joke? Mozart dies and God greets him at the Pearly Gates and says, "Mozart, so good to see you. We need a concertmaster for our Heavenly Symphony Orchestra." And Mozart asks: "But what about Bach? " And God says: "I am Bach.")

The title tune, Aaron Copland's magnificent early twentieth century-penned "Fanfare for the Common Man" includes, again, a panoply of Dean-voiced brass sounds, and even Dean-voiced percussion parts (orchestral symbols) in a layered sonic world shaped into a three and half minute masterpiece.

And Mozart, the current Heavenly concertmaster, is here with the ebullient and life-affirming "Eine Klein Nachtmusik, K. 525," along with Mendelsson, Elgar, Debussy and Khachaturian, in a brilliantly conceived and executed vocal/orchestral work by an uncommon music-making man, Dan Dean.