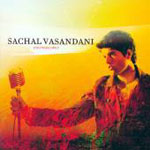 Sachal Vasandani has all the right credentials in tow as he makes his debut recording. He was a semi-finalist at the 2004 Thelonious Monk Institute Competition. He has a string of appearances in New York that have served to showcase his talent as a singer. And he has the right instincts when it comes to selecting the songs for his CD. He does not restrict himself to jazz, a good thing considering that he leans strongly into pop territory here.

Vasandani has a fine voice. He is articulate and he parlays his sense of phrasing into some vivid experiences. Helping him along are pianist Jeb Patton, bassist David Wong and drummer Quincy Davis. Guests including vibraphonist Stefon Harris, trumpeter Marcus Printup and guitarist Doug Wamble extend the parameters.

Vasandani wrote three tunes, of which "Please Mr. Ogilvy not only has a sly sense of humor, but also a blues feel, attributes that give it strength and pith. "Send 'Em Up to Heaven has a strong pulse. Vasandani gets into the depth of the lyric and whirls it forward, capturing the doubts that assail one, on this song that deals with the struggle to forgive.

He rips into "Strange Things Happen, curling his voice around the words, chewing on them and letting the coil jump loose in a welter of blues. Printup adds to the punch with some earthy, deep rooted play on the trumpet. One of the finest moments comes with his take of "I Could Have Told You, in which all the pain comes through in the shades he brings to the tale of a love lost.

Vasandani makes enough of an impact and points the way to a promising future.

Naked As We Came; Please Mr. Ogilvy; A Flower Is A Lonesome Thing; Its Only Love That Gets You Through; Storybook Fiction; Strange Things Happening; Send 'Em Up To Heaven; I Could Have Told You; I was Just One More for You; September In The Rain; I Can't Give You Anything But Love; You Won't Forget Me.