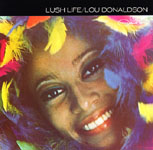 Artists sometimes step out of character and produce a work that's not in the style for which they have come to be associated. The results are often intriguing if not always successful, and are a testament to their versatility. Such is the case with altoist Lou Donaldson's Lush Life, reissued after being given the RVG treatment by Blue Note Records. Originally recorded in 1967 but not issued until 1980, Lush Life is a collection of ballads played by a six-horn front line and rhythm section.

The pieces are all standards arranged by pianist Duke Pearson. The group, a veritable who's who of jazz giants, is led by Donaldson who, at the time, was popular for his bluesy soul-jazz recordings with loose backing of an organ-based rhythm section. The music here is very tightly arranged, and although Donaldson takes the majority of solos there are others whose horns punctuate the beautiful music with their poignant notes.

Donaldson plays the ballads with the same extreme facility and creativity that he has displayed on his other hard-bop and soul-jazz recordings. There is, however, a certain monotony in the extreme similarity that the tracks bear to each other and, in the end, a few become indistinguishable from one another. This is not to say that the work in any way becomes of lesser quality as one continues to listen to the record, but only that the emphasis is on maintaining a certain mood rather than variety.

The reissue does not provide any alternate takes or previously unissued tracks, but it does provide enhanced and pristine sound quality. This is an enjoyable record that, although a tad monotonous, stands as proof that Donaldson is not a saxophonist who can be pigeonholed into one genre or another, but is a versatile and creative musician.

Sweet Slumber; You've Changed; The Good Life; Star Dust; What Will I Tell My Heart; It Might As Well Be Spring; Sweet And Lovely.