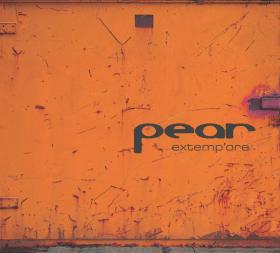 Most jazz albums involve at least a little bit of preparation: song selection, rehearsals, selection of sidemen and so on. Pear, on the other hand, is after something much more spontaneous and pure on its debut, Extemp'ore. The group is comprised of percussionist Rick Milne and keyboardist Nick Pierone. They enter the studio and play whatever comes to mind, sometimes inviting a few other musicians along for the ride, like bassists Jennifer Leitham and Jimmy Johnson). The songs are then constructed afterward by seamlessly stitching bits and pieces of the studio recordings together to create the tracks, similar to what Miles Davis did with Bitches Brew (Columbia, 1969). The liner notes describe the process as like a tightrope walk (not exactly the most original metaphor for jazz), begging the question, given as much time as is required to put a record together: why would Pear favor something this spontaneous?

Well, there's something to be said for getting right to the heart of the creative process by eliminating the need for composing or working through a few set motifs, turning performance into pure creation. Pear essentially takes these bursts of creativity and fashions them into tracks afterwards, using technology, loops, and the like. The end result is a frequently interesting record that explores a lot of terrain: a free jazz burst of energy like "Session 15" is followed up by the trance-like background of "Tribute to Lorraine." There's a melodic sensibility that pops up from time to time, nothing that evolves into an actual song, but enough to ground the wanderings of the duo.

Pear seems split between straddling the avant-garde and the ambient; one track will feature Cecil Taylor-ish excursions while the next will feature lush keyboard soundscapes or exotic instruments like the koto. There's a natural tension between the flurries of notes in free jazz and the minimalist approach of much electronic music, a dichotomy that Pear is more than willing to explore. In addition, Pear seems willing to experiment with added vocals (nothing really in the name of lyrics; one track features answering machine messages while another features French so distorted as to be almost incomprehensible), tape loops, and even a rap (not a very good one, though.) But despite the tracks that might be found cumbersome and bewildering, there's always something new on the horizon, and Extemp'ore ends up being the kind of record that slowly unfolds its secrets.

Extemp'ore is a reminder of the joy and spirit in unfettered creativity and playing. At times the record does seem like a bunch of rehearsal tapes that present interesting ideas that should have been further developed. But who can argue with a duo that's so wickedly interested in taking its own style of playing and tinkering with every new idea that comes along?