BY DAN MCCLENAGHAN
August 15, 2017
Sign in to view read count 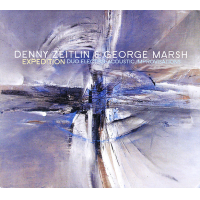 In spite of his achievement, early on, of having attained the status of top tier jazz pianist, Denny Zeitlin has always wanted to expand his artistry beyond the confines of the trio format where he made his name. Call it artistic restlessness. His first release came in 1964, the Columbia Records date, Cathexis, an acoustic trio affair followed by three more of the same on Columbia. All well received.

But something must have been missing. In 1973, Zeitlin—along with drummer George Marsh and bassist Mel Graves—began his widening his search for new sounds with Expansion (Double Helix Records), with Zeitlin utilizing a variety of electronic keyboards and early-in-the-game synthesizers. He followed this up with Syzygy (Arch 1977), a second electro-acoustic offering, also including drummer Marsh. These two early innovations into the realm of synthesizers and electronics set the stage for Zeitlin's marvelous orchestral acoustic-electronic-avant-garde soundtrack to the 1978 sci-fi/horror film, Invasion of the Body Snatchers.

In the late seventies and early eighties, Zeitlin returned to acoustic music, culminating in the new millennium with some of the best work of his long career with Sunnyside Records. And then his electronic muse reappeared, resulting in Both/And: Solo Electro-Acoustic Adventures (Sunnyside Records, 2013), that lead to his renewed collaboration with drummer George Marsh, on Riding The Moment (Sunnyside Records, 2015), a set of vibrant, spontaneous compositions featuring piano, synthesizers and Marsh's distinctive percussion.

This brings us to Expedition:  Duo Electro-Acoustic Improvisations. George Marsh is back, and, unlike the piano trio format, there are no timbral limitations, as Zeitlin employees a variety of hardware and virtual synthesizers—along with acoustic piano, joined by the ever inventive drumming of Marsh.

"Spiral Nebula" displays a sweeping, majestic grace, spare, amorphous, with delicate piano notes blinking on like pin point stars inside of Marsh's galactic rumblings, with a come-and-go choir of electronic angels painting soft pastels in the background. "Geysers" is more electro-orchestral; "Traffic" skitters through a neon metropolis of some future utopia, full of driverless cars and androids and gaudy holograms and luminescent 3D advertisements, and sleek, physically-enhanced human beings.

There's a lot for the ears to digest. Synthesizers—and Denny Zeitlin and George Marsh—are capable of so much, as in the closer/title tune, with its bowed bass-like opening that evolves in the direction of the symphonic, featuring a horn-like monologue backed by electro-drones and swirlings, interjected with Marsh's robust percussive poetry. A superb wrap-up to this set of the Denny Zeitlin/George Marsh innovations.

Geysers; Thorns Of Life; Traffic; Shards Of Blue; Lives of Clowns; Spiral Nebula; Shooting The Rapids; One Song; Sentinel; Watch Where You Step; Not Lost In The Shuffle; The Hunt; Expedition.